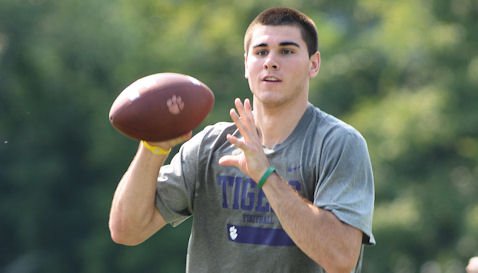 Kelly, out of Buffalo, N.Y., was one of 24 of the nation’s top quarterbacks that convened in Malibu, California this past week to vie for Elite 11 honors. The field is made up of the country’s very best signal-callers, and seven of the top eight quarterbacks in the ESPNU 150, including the top five, were on hand.

Kelly shined during the camp and was voted one of the nation’s Elite 11, but told TigerNet that he prefers the role of underdog.

“I don’t worry about the rankings or what star some of these services have,” Kelly said. “I would rather be one of the lower guys. But, I wanted to go out there and prove myself and I think I did that this time. We did a lot of drills, like speed drills and reading defenses.”

Kelly said the camp was a learning experience, but after traveling to Nike’s The Opening in Beaverton, Oregon a few weeks ago and the Elite 11 this past week, he said he is ready to get to work on his high school season.

“I have been learning a lot, but I have a team back home and we have a lot of young guys,” he said. “I am going to start back to work on Saturday with them and help them get ready. I am not going to back off, and I will be back practicing with them. That is one thing about all of this – you learn a lot but it takes away from team time.”

However, being with other quarterbacks from around the country did enable Kelly to get in a little smack talk with Zeke Pike

“Coach O’Brien wanted me to get the ball out quick,” he said. “George Whitfield is all about the feet, and I learned a lot about drops. He also said I had my left arm too close when I threw, so we worked on that. There were so many people out there – NFL guys and college guys – and they knew what they were doing.”