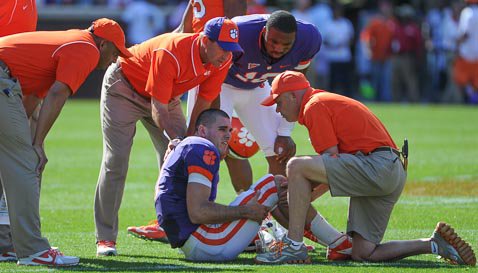 Cooper was injured after making a five-yard yard reception from Kelly near the home sideline on the 11th play of the scrimmage. Kelly suffered his injury just nine plays later, the 20th play of the scrimmage, when he made a 17-yard run. Kelly finished the day 6-7 for 43 yards passing and a touchdown and had 4-23 rushing.

Cooper played in all 13 games last year, three as a starter, and had 10 receptions 93 yards and two touchdowns. He was listed as Clemson’s first-team tight end for 2013. Kelly red-shirted last season.

“As far as Sam Cooper is concerned, this was certainly going to be his time at tight end. We have had quite a run of production at tight end the last few years with Michael Palmer

“Sam is the most experienced tight end we have and this is a tough loss. He was coming into his own. We have some young, talented tight ends who are now going to have to step up.

“I feel badly for Chad because he was doing very well picking up the offense. He was off to a great start in the Spring Game. This will make us thin at quarterback with just two on scholarship in 2013.”