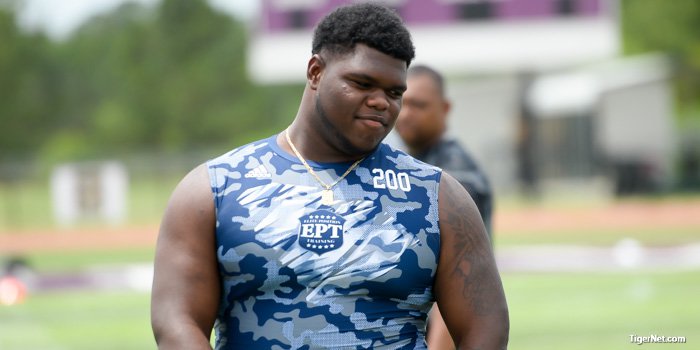 Belk at the EPT Showcase in Columbia last Sunday

It isn’t easy being inconspicuous in a small town, but it’s even harder when you stand well over six feet, weigh in at 282 pounds and are committed to the defending national champions.

Don’t expect Josh Belk to let all the attention go to his head, however. His mom and dad will make sure of that.

The 2018 Clemson commit out of Richburg (SC) Lewisville is just now realizing the kind of attention that comes with being a high-profile recruit and it’s something he wants to use as motivation.

“Being in a small town, there's always people talking and whispering,” Belk told TigerNet. “I was out washing my truck the other day and people were stopping to shake my hand and telling me they were ready for me to get to Clemson and that they would be watching for me. It's motivation. It's a blessing because I'm the first one in my family to even be on the road to going to college, so I want continue that.

“I just want to help my parents out. I've watched them struggle when I was younger and I want to put an end to that.”

Belk’s parents are the kind of people it’s easy to look up to, and both have shown Josh what it means to earn a living.

“They're both truck drivers. My mom drives dump trucks and my dad drives logging trucks. During school, she wants to be there for my little brother and sister,” Belk said. “They stay on me about my grades. If my grades start slipping, they take everything away. I won't have a phone or anything and I can't go anywhere.

“They just tell me that working every day doing something that you don't want to do is tough, so if I love football then I have to work hard so I can make it to the NFL one day. That's my dream. I want to get there so I can help them out.”

Belk says he’s seen his parents come in at night after a long day behind the wheel, and it provides further motivation to get a college degree at the very least and hopefully play in the NFL.

“It would be a sense of accomplishment and relief. I don't want to have to watch them go through that hurt or that struggle anymore,” he said.

He also is motivated by younger brother A.J. (who is 12) and younger sister Arnikki (who is six).

In the meantime, the Clemson coaches have sent a consistent message to their future defensive tackle.

“They just tell me to keep working hard and be ready to work when I get there,” he said. “It will put me ahead of some of the other guys. I can get used to a lot of things and then I'll be more ready for the season.”

The coaches also think they might have a dual-threat in Belk – he can play inside or outside.

“I am a natural three-technique with my size and quickness. I like the outside and being able to edge rush because one-on-one, I haven't been stopped much,” Belk said. “I like to get back to the quarterback. In the ACC, they pass a lot and I think I can use my quickness and speed against an o-lineman. The coaches think with my speed and my frame that I can move inside and outside.”