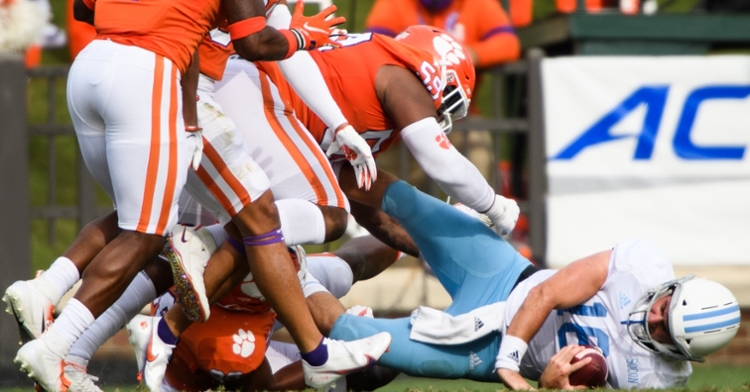 Williams makes a stop against The Citadel.

Jordan Williams is making a move and his hard work is paying off.

The redshirt junior defensive tackle out of Virginia entered this season having recorded 44 career tackles, including 8.5 for loss and 4.0 sacks, to go with two pass breakups and a forced fumble. Williams has played 444 snaps in 27 career games but knew that a loaded group at defensive tackle meant he was going to have to work even harder for a spot.

Williams made his first career start in the season opener against Wake Forest on Sept. 12th and has turned in two stellar performances through the Tigers’ first two games. So good, in fact, that he’s drawn the top grade for interior linemen nationally per Pro Football Focus.

Williams holds the best mark on PFF out of Clemson defenders to see action in both games this season (90.8 grade) with the leading grade in pass rush (90.1) -- tied for the team lead with four QB hurries -- and the third-best mark in rush defense (74.6) with three total stops. He ranked seventh last year on the Tigers in pass rush grade but 20th in overall grade.

It wasn’t an easy process.

“I feel like I had to put more work in, and if I wanted to get where I wanted to get, I definitely couldn’t stay the same – I had to get better and improve,” Williams said. “I think that just becomes a product of starting. I feel like we have a lot of guys in the room that work very hard and are pushing each other, and we’re pushing each other and competing every day. But earning the starting spot, it was definitely exciting for me and important for me, and I feel like my hard work didn’t go unnoticed and it’s being recognized.”

Williams watched several of his former teammates who were defensive leaders, and now he’s ready to be a leader for a group of talented youngsters in Demonte Capehart, Bryan Bresee, Tre Williams, and defensive end Myles Murphy.

“It's honestly so exciting to see, especially seeing Bryan from recruiting to being here now. And all of those guys like Demonte and Tre and guys like Myles, they are just guys who are willing to work and willing to learn and do whatever it takes,” Williams said. “They understand where they are right now and they've definitely put the work in, for sure. It's so exciting to see it happen on a daily basis. I try to stay on them and help them in any way I can, bring them to film or do extra workouts or extra things after practice to do my part, to be a leader. Guys like Cle (Clelin Ferrell) and Austin (Bryant) and Christian (Wilkins) and Dexter (Lawrence) did it for me made that happen for me and I am trying to return the favor to those guys now.”

Next up for the Tigers is an Oct. 3rd home game against Virginia, a game that Williams (from Virginia Beach) is looking forward to.