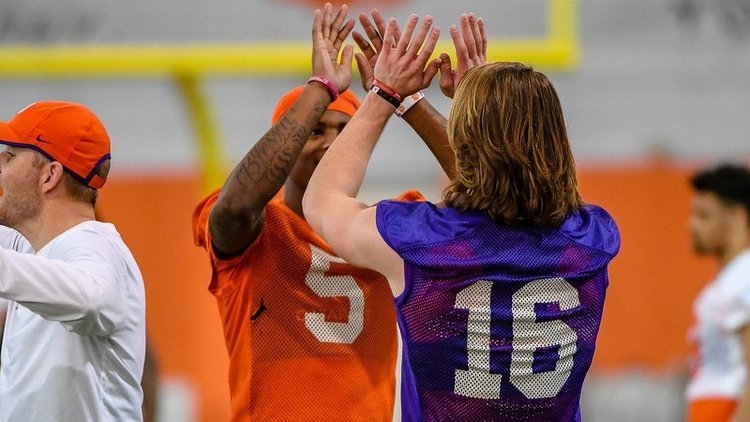 CLEMSON – It’s been just two months since Clemson scaled the mountain and claimed the 2018 national championship, but the 2019 Tigers are already hungry for another title.

Jeff Scott would’ve been surprised if there wasn’t an excitement around the offense during spring practice and he hasn’t been disappointed during the first two practices.

“Really good start offensively. Really pleased with the group. We just want to see if the guys are hungry, which I expected them to be,” Scott told the media Friday evening. “It would've been a surprise if they weren't. Really proud of all the positions. Guys are working hard. The offensive line, four seniors and a lot of leadership in that group. Even though we've got a lot of guys returning, it just feels like a young, eager, hungry group and as a coach, that's exactly what you're looking for, exactly what you want. It's a great start, but that's all it is - a start. We'll know more tomorrow when we put the pads on and finish up our first week of spring ball.”

This team already knows what could be, but they have to put in the work first after the quick turnaround from the January 7th championship game.

“I think for us it's become normal. Three of the four years, you go to the national championship game, have a quick winter and then be right back out there,” Scott said. “We want that to be the norm. We have that calendar, and we know exactly what that feels like. I think it's good. As a coach, you want to get back out there. One of the hardest times for me as a coach is that January and February where you're out recruiting, and you're away from your guys, and you can't wait to get back to this time of the year where you can see them every day and be and around them and get back to coaching ball. It's great, but it kind of reminds you of last year - starting over and knowing what could be, but where are we now and what do we have to do to get there?”

For Scott, he has ten scholarship wide receivers, a group that he says is the best he’s ever had.

“I feel like I say that every year and when you say it every year, you think, is it really true? Yes, it really is,” he said. “This is the first year we've had ten scholarship guys and all three of the first three groups are all doing excellent. It's a lot of fun out here. Every group that goes out there has an opportunity to make plays, so it's going to be fun.”

Scott’s three freshmen wide receiver all enrolled in January and he said he’s been pleased with their progress so far.

Frank Ladson has already added weight and is reminding Scott of Sammy Watkins.

“Really pleased with all of them. I knew a little bit more about Frank because I had him in camp and got to see him,” he said. “I think the biggest thing about Frank that I'm pleased with is he came in at 182 and today he weighed 197, so he's gained 15 pounds in two months. I could see that in him. He's stronger out here. He's special. His speed, acceleration, quickness reminds me of another number two we had from Florida, so that's a pretty strong statement there.”

Ngata’s work ethic has stood out.

“Then, Joe Ngata is big, strong, explosive. He's made a bunch of plays. He's a hard worker, very serious about his business, loves it. Those two guys are roommates and two of the best young guys we've had come in,” he said.

“Brannon Spector, I'm very pleased with him. Playing in the slot, runs extremely well. He's learning what he's doing but he made some plays today. It's a lot of fun,” he said.

Jaelyn Lay – the freshman tight end – has also caught Scott’s attention, but it’s more about what he’s doing off the field.

“Physically, he looks like Dwayne Allen as a sophomore or a junior. He's getting thrown right in the fire, which is good for him,” he said. “It's a little tough on him right now. 3-back is one of the more difficult positions to play because there's a ton of alignment, a ton of different motions, so he's figuring it out. Very athletic, strong, probably the thing I'm most pleased with is out of all of the freshmen, he's probably been in the meeting room the most.”