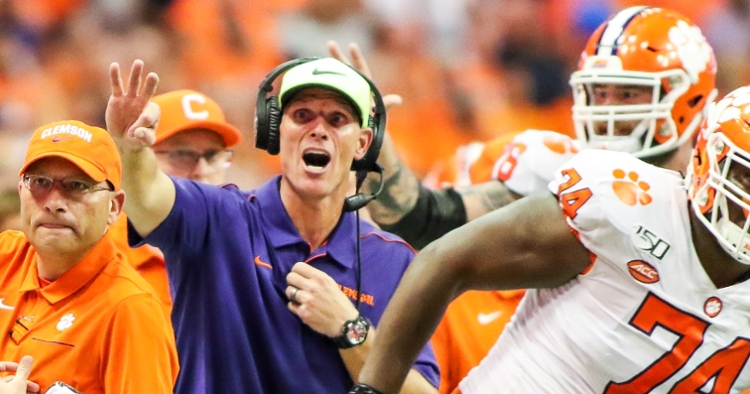 Venables makes a signal during the win over Syracuse

CLEMSON – Brent Venables is known for his intensity and excitement on game days. He wanders onto the playing surface and has to be corralled by get-back coach Adam Smotherman, the larger Smotherman fighting the feisty Venables each step of the way.

For Venables, game days are fun, but preparing for game days is where he finds his most enjoyment.

“Yeah. There’s strain involved, and you enjoy that part until you get it worked out,” Venables said. “You’ve got to get everybody staff-wise to collaborate and do it together. You’ve got to get your players to be able to understand what you need to do in order to win. You don’t need to reinvent the wheel, but you have to give your players their best chance to be successful. There’s enjoyment, especially when it works. But that’s a daily challenge, it’s a way to be competitive as a person. I get to come to work and be competitive every day. If you really feel like you didn’t do a good job today, you’re going to fail. That’s a good motivator in itself.”

What does it take to win at this level, and stop opponents from scoring even when the offense puts the defense in a bad spot?

“I think attitude, belief, confidence, those three things. Just to be a good competitor in anything,” Venables said. “I think those are great qualities and traits to have. Having the right kind of attitude, it’s the mindset. It’s got to come to attitude as opposed to ‘Ah man, they’ve got the ball down here, they’re going to score. It’s easy points.’ And then the belief, be patient and play it one play at a time, you can have success. It takes a lot of toughness and courage to do that too.”

Venables and the defense lost several leaders from the 2018 team but is seeing several other players step into vocal roles.

“We lost a lot of great leadership. Trayvon Mullen was a great leader in the secondary, and then Tre (Lamar) and Kendall (Joseph), J.D. and Judah (Davis), and Jalen (Williams),” Venables said. “There are five guys and then Shaq (Smith) was a really good leader. Shaq was a guy that hadn’t played, and our best leader for a guy that hadn’t played as much. He just had a lot of respect. There are six linebackers you’ve lost. Then again, you lost not only the foursome but then you lost (Albert Huggins). You know, a guy like Chris Register was a well-respected guy that brings know-how and experience and things like that, and ownership.

“That’s a lot of what leadership is. It’s, ‘I’ve paid the price. I don’t want a really small little sliver over here and this matters to me. It matters what you do and your attitude, and so forth.’ Some guys have bigger roles on the field so you feel like there’s more of a leadership, but everybody can contribute leadership. To see that group of guys really come into their own, and I’m talking about the returning guys on the secondary, I’m talking about Isaiah (Simmons), Chad (Smith), and Jamie (James Skalski) in particular being good leaders. We took it from that foursome and those backers and now it’s kind of transformed that back seven as a whole providing a lot of good leadership.”

Linebacker Isaiah Simmons is a leader on and off the field and is playing the best football of his career.

“He’s a very dynamic player. He has the chance to be a great player,” Venables said. “He gives you a lot of versatility. He’s long. He’s athletic. His football IQ has really improved and now we’re still just polishing and working to clean up fundamentals and techniques and things of that nature to help him become a great player. His work ethic is terrific. I think he took more snaps than anybody on the team in the game, so he has a lot of durability as well. With his role on special teams and with his role as a player, you can do a lot of things with him.”