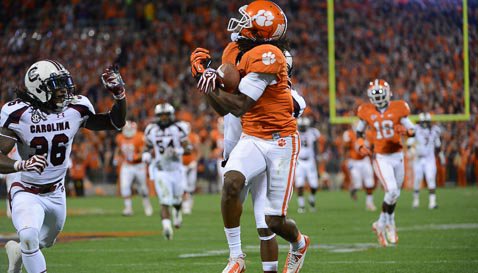 The first half of the Clemson-South Carolina game was just about what everyone expected - the Tigers made plays offensively, while South Carolina’s defense made their fair share of stops.

The Tigers and Gamecocks traded possessions with both offenses sputtering at times, but the Clemson offense did just enough to give the Tigers the lead at intermission.

What went right: After giving up a third-and-fourteen, Josh Watson

Josh Watson
RS So. Defensive Tackle
#91 6-4, 285
Wilmington, DE
View Full Profile knocked the Gamecocks out of field goal range on the next third-and-long by sacking quarterback Dylan Thompson in the first quarter.

After being stopped on their first possession, the Tigers marched methodically down the field on a 16-play, 85-yard touchdown drive for the first points of the game. Three of the four third down conversions on the drive were runs by Tajh Boyd

On Clemson’s third possession, Hot Rod McDowell outran Jadeveon Clowney to the edge for 32 yards behind the blocking of Charone Peake

Charone Peake
So. Wide Receiver
#19 6-3, 200
Moore, SC
View Full Profile . On the next snap, Boyd found Nuk Hopkins down the sideline for a 42-yard touchdown.

With 1:22 to go in the first quarter, the Tigers had 163 yards of total offense surpassing the Clemson’s total last year against South Carolina (153 yards).

To end the first quarter, the Tigers forced South Carolina into its first three-and-out of the game. On third down, the Gamecocks for flagged for unnecessary roughness- flag that couldn’t come quick enough with the South Carolina players getting a little too chippy.

After the offense sputtered to begin the second quarter, punter Spencer Benton

Thompson launched a pass and Peters dropped an interception on the underthrown pass, but Corey Crawford

Corey Crawford
So. Defensive End
#93 6-5, 270
Columbus, GA
View Full Profile made up for it with a 12-yard sack. Thompson followed the sack with an incomplete pass,forcing another South Carolina punt.

Midway through the second quarter, Ellington had 10 carries for 45 yards taking him over 1,000 yards for the season.

After Boyd’s interception, the Clemson defense held forcing a punt and giving the Tigers offense one more opportunity in the first half to score.

What went wrong: After stopping the Gamecocks on third down, the Clemson special teams weren’t ready, forcing the Tigers to burn an early time out.

Inside the redzone, Thompson found Bruce Ellington in the endzone when Garry Peters

Garry Peters
RS So. Defensive Back
#26 6-0, 195
Conyers, GA
View Full Profile failed to turn around for South Carolina’s first touchdown of the game. Thompson was four-for-four for 56 yards on the drive.

South Carolina’s passing attack accounted for 164 yards of its 183 yards of total offense. The Gamecocks were four-of-eight on fourth down.

Tajh Boyd launched a downfield pass late in the first half just as he was being drilled by Aldrick Fordham and the pass was underthrown and intercepted by DeVonte Holloman- his third interception against Clemson.

Turning Point of the Half: Leading by a touchdown, the Tigers had two different possessions that reached Carolina territory, but they were unable to add to the lead. The Tigers didn’t score in the second quarter, the first time this season they haven’t scored in that stanza.

Stat of the Half: Last season, Clemson had 153 yards of total offense. The Tigers surpassed that number with 237 yards in the first half.