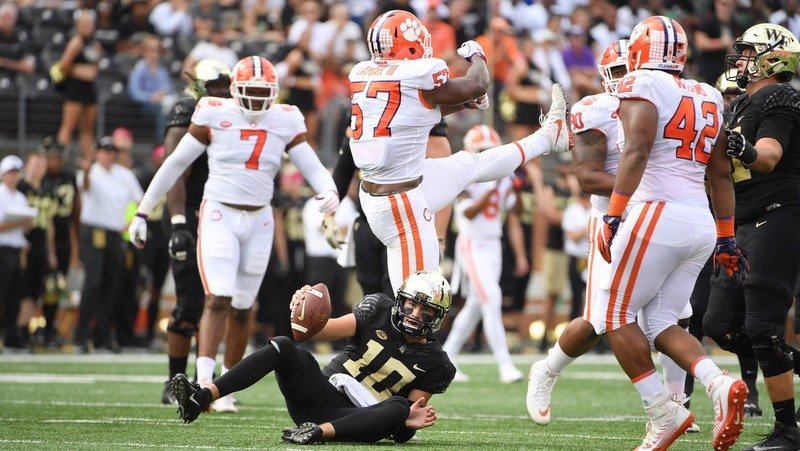 WINSTON SALEM, NC – A trip to Winston Salem was just what the doctor ordered for No. 4 Clemson’s football team before the off week.

Many have wondered about the sputtering Clemson offense, but they put they put the angst and criticism to rest – for at least a week – with a 63-3 drubbing of Wake Forest in front of an announced sellout crowd at BB&T Field.

OFFENSIVE PLAYER OF THE GAME:While the honor could go solely to Travis Etienne, who has rushed for 370 yards in the last two game, the entire running back corps was impressive in Saturday’s blowout win. Etienne carried the ball 10 times for 167 yards and three touchdowns in two quarters and the first drive of the third quarter. Adam Choice added 10 carries for 128 yards and a score, while freshman Lyn-J Dixon had his first career 100-yard game with 10 carries for 163 yards and a touchdown.

DEFENSIVE PLAYER OF THE GAME: Tre Lamar had arguably his best game since suffering a shoulder injury in November 2017 against Florida State. Lamar logged his first sack since the game against the Seminoles when he drove James Blackmon into the ground and was out for the rest of the season. Lamar was credited with eight tackles, two tackles for loss, two sacks and a quarterback hurry.

*First Score – The Clemson offense scuffled for much of the first quarter, punting on two possessions and fumbling on another. Etienne made the Deacons pay on the fourth drive, taking the handoff and blasting up the middle for a 59-yard touchdown run that gave the Tigers a 7-0 lead.

*Muse INT –Tanner Muse interception in the first quarter set up a three-yard run by Etienne, giving Clemson a 14-0 lead early in the second quarter. The touchdown marked the fourth consecutive game with at least two touchdowns for Etienne.

*Renfrow does it all – Hunter Renfrow, who caught two passes for 21 yards came on to punt late in the fourth quarter and booted it 42 yards. He also came on to play quarterback on the game’s last drive. Not only did Renfrow play quarterback, he made the block that sprung Dixon for Clemson’s final touchdown of the game.

STAT OF THE GAME: Clemson had three players reach the 100-yard rushing mark in a single game for only the sixth time in school history. It's the program's first time accomplishing the feat since Sept. 30, 2006, vs. Louisiana Tech (James Davis, C.J. Spiller, Demerick Chancellor).

UP NEXT: Clemson gets a much-needed off week. They will have interviews Monday and then a community service project Tuesday afternoon. After the off week, the Tigers host unbeaten N.C. State.

Wake Forest is also off next week before traveling to Florida State October 20.