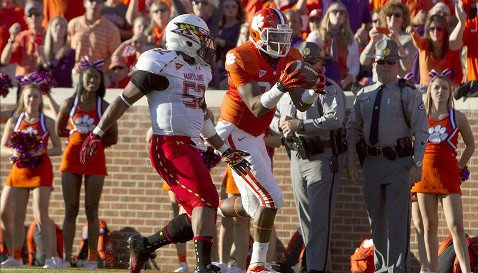 What went right: Tajh Boyd found Adam Humphries diving in the endzone for a 13-yard touchdown. The touchdown was the first of Humphries’ career.

In the first quarter, Maryland quarterback Shawn Petty rolled to his left with Clemson defensive end Corey Crawford in hot pursuit. Petty lost the football and Crawford picked up the ball, rumbling 16 yards for a touchdown.

After a Tajh Boyd fumble, Clemson defensive end Malliciah Goodman got the ball back for Tigers after sacking Petty, forcing the fumble and recovering the fumble. With that recovery, it marked the ninth consecutive time that the Clemson defense had held the opposition scoreless following a Clemson turnover.

Boyd hit Nuk Hopkins in the endzone for the Tigers’ second offensive touchdown of the day. Hopkins has caught touchdown passes is seven consecutive games which is a Clemson record.

Brandon Ford out-muscled the defender for a 22-yard touchdown and Clemson’s fourth score of the game.

The Tigers had the ball fourth-and-one on their own 45-yard line and elected to go for it. Andre Ellington ran behind Eric Mac Lain and Darrell Smith to pick up the first down.

Spencer Shuey sacked Petty for a loss of 15 yards

After sitting out last week with a hamstring injury, Andre Ellington found his way into the endzone in the second quarter, showing no ill effects from the injury. He finished the first half 13 carries for 55 yards.

Stanton Seckinger felt what it’s like to score a touchdown in Death Valley for the first time when Cole Stoudt found him early in the endzone early in the fourth quarter.

Quandon Christian forced a fumble in the third quarter and it was recovered by Travis Blanks.

Backup quarterback Cole Stoudt continues to get extensive work, and he led a 16-play scoring drive that started in the third quarter and finished in the fourth quarter.

What went wrong: Boyd fumbled the ball midway through the second quarter as he struggled to get into the endzone, which was his fifth turnover in the last six quarters. He had an earlier fumble near midfield.

Humphries muffed a punt, giving Maryland the ball on the 18 yard line and setting up the Terps’ first touchdown of the afternoon.

Maryland’s touchdown came when the Clemson defense bit too hard on the play-action fake, leaving Devonte Campbell wide open for the touchdown.

Maryland has the ball at its own two following the Boyd fumble, and the Clemson defense let the Maryland running back get loose for a run that ended near midfield.

The Tigers attempted a 55-yard field goal by Spencer Benton. The kick was short, midway through the endzone, and Dexter McDougle grabbed the errant kick and returned it 74 yards to the Clemson 26-yard line. Not only was the kick off, but the Tigers didn’t look prepared for the fact that Maryland could return the kick. On McDougle’s return, the tackling was sloppy.

Clemson’s offensive line is still struggling to run block, especially on the right side.

Turning Point of the Game: Travis Blanks recovered a fumble forced by Quandon Christian in the third quarter.

Stat of the Game: The first accepted penalty in the game came with 6:40 remaining in the third quarter.