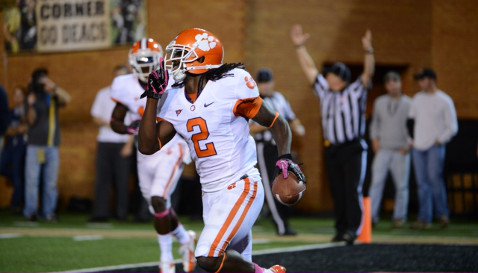 Sammy Watkins
So. Wide Receiver
#2 6-1, 205
Fort Myers, FL
View Full Profile had nine catches for 202 yards, breaking the record of 197 yards set by Nuk Hopkins against Boston College less than a month ago. Watkins had 177 receiving yards in the first half.

What went right: Clemson’s offense muddled through the first two possessions, but Tajh Boyd found a wide-openWatkins down the left sideline for a 57-yard gain, setting up Clemson’s first touchdown. Running back Andre Ellington

Clemson held Wake Forest to 290 total yards, the first time this season Clemson has held a team under 300 yards of offense.

The defense gave up another touchdown – this one in the third quarter – that allowed Wake to creep back within 35-13. Corner Garry Peters

Garry Peters
RS So. Defensive Back
#26 6-0, 195
Conyers, GA
View Full Profile spent much of the third quarter with an ice pack on his hip, and Clemson’s already thin secondary was playing even thinner.

Turning Point of the Game:Boyd’s long pass to Watkins in the first quarter – it gave the Clemson offense a spark and it was never close after that as the Tigers scored on five straight possessions.