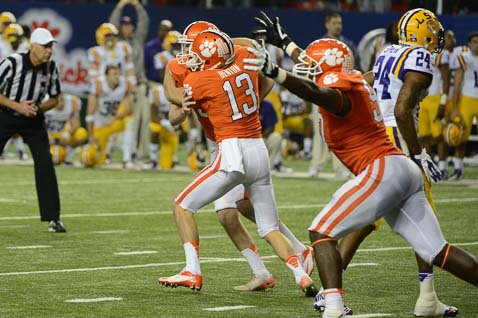 Malliciah Goodman
Sr. Defensive End
#97 6-4, 270
Florence, SC
View Full Profile has been quiet most of the season, but came up with two huge sacks in the first quarter.

Tajh Boyd
RS Jr. Quarterback
#10 6-1, 225
Hampton, VA
View Full Profile rushed for 23 yards on Clemson’s second drive of the game, a drive that culminated with an 11-yard touchdown run to tie the game.

LSU had the ball on third-and-one on its own 29 and the Clemson defense- led by Reader- stuffed the run to force an LSU punt.

Travis Blanks
Fr. Defensive Back
#11 6-1, 190
Tallahassee, FL
View Full Profile picked off Mettenberger’s pass with less than a minute remaining in the half.

With the Clemson offense struggling, the defense stopped LSU on third-and-short to force consecutive three and outs.

After the Ellington fumble, the Clemson defense held LSU to a field goal.

Xavier Brewer
Gr. Defensive Back
#9 5-11, 190
Jacksonville, FL
View Full Profile jumped on a third-and-seven for LSU, giving the Cajun Tigers a second chance to pick up the first down, but Brewer avenged his mistake by stopping the runner short of the first down marker.

After a big stop by Brewer and the Clemson defense, the offense set up a Chandler Catanzaro field goal to pull the Clemson within eight.

With less than three minutes remaining in the game, Boyd found Hopkins at the back of the endzone for a 12-yard touchdown to bring Clemson within two.

Down two, the Clemson defense needed to make a stop to give the offense a chance and they forced LSU into a three-and-out.

Boyd hit Hopkins on a crucial 4th-and-16 to keep the final drive alive, leading up to CatMan’s field goal.

What went wrong: On the second play of the game, Clemson wide receiver Sammy Watkins

After consecutive three-and-outs, LSU drove 65 yards for their second touchdown of the game. The drive was aided by a 15-yard roughing the passer penalty on Christian.

Right tackle Giff Timothy went out with a leg injury late in the first quarter.

On fourth-and-10 and with Clemson driving late in the second quarter, Clemson elected to go for it with Boyd running after being flushed from the pocket, but he came up a half-yard short.

Clemson allowed a 43-yard return on the opening kickoff of the second half.

LSU running back Jeremy Hill took the ball 57 yards for a touchdown on the first play from scrimmage of the second half.

Clemson opened the second half with a three-and-out after Hopkins dropped a pass that would’ve given Clemson the first down.

After picking up eight yards on first down, Andre Ellington

Andre Ellington
RS Sr. Running Back
#23 5-10, 195
Moncks Corner, SC
View Full Profile fumbled the ball to give the LSU the ball on the 29-yard line.

On third down, LSU was flagged for pass interference on Hopkins to give Clemson the ball on the 10-yard line, but Boyd was forced out of the pocket twice and Clemson had to settle for a field goal.

Because Clemson had an extra point blocked earlier in the game, Clemson was forced to go for two points and failed to covert, trailing by two with less than three minutes remaining in the game.

With 2:47 remaining in the game, Clemson elects to kick short and give LSU field position.

Turning Point of the Game: Boyd’s pass to Hopkins on fourth down to keep the final drive alive.

Stat of the Game: Clemson ran 102 plays and had 437 total yards against one of the nation’s best defenses.