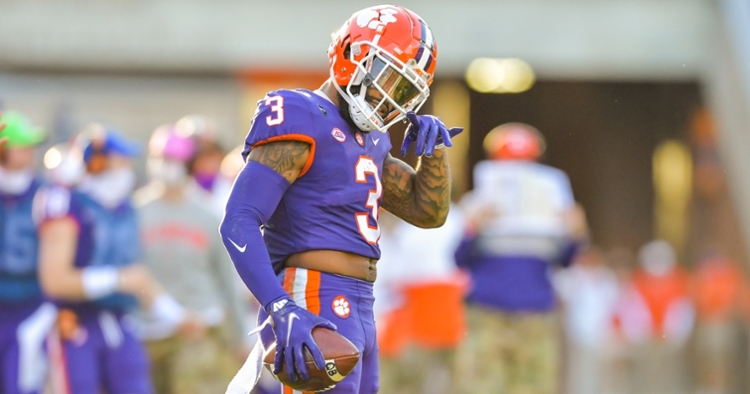 Rodgers has been there when needed by Clemson's QBs. (ACC photo).

Clemson bounced back in style to close out its scheduled home slate with a 52-17 win over Pittsburgh on Saturday. We take a deeper look into the game with the help of Pro Football Focus:

Lawrence announced his presence back on the national scene by shaking off a 4-for-8 start passing to connect on 22-of-his-last-29 throws and total 403 yards passing. Lawrence graded the second-best in the nation among Power 5 QBs this week (90.3; Florida’s Kyle Trask, 90.7 on top). Showing what a junior season he’s had, that grade is actually his fourth-best of the season and third-best against Power 5 competition.

Rodgers continues to be Mr. Reliable for Clemson’s QBs after bringing in 10 catches in 11 targets for 93 yards for the second-best grade on the Tiger offense Saturday (76.3). He also posted his second-best run blocking game of the season (79 in 17 run blocking snaps). Rodgers had quite the catch called back as well.

They called this one back but that shouldn't stop all of us from admiring this BEAUTIFUL throw-and-catch from Trevor Lawrence to Amari Rodgers.

A work of art.

Amari Rodgers: Most yards after contact among all power five WRs (204) pic.twitter.com/VCNL3MhpAh

And Powell continues to be a big-play threat after a third-straight game of triple-digit receiving yards with six grabs for 176 yards and a TD. He averaged a season-high 10 yards after catch and graded well as a run blocker as well against the Panthers (77.3).

* Clemson’s effort on the ground rated the second-best of the season (78.4; 86.5 v. Miami the best-graded) with 145 yards on 38 rushes against a top-10 unit against the run. The run blocking didn’t correlate with that improved effort according to PFF, however, grading the worst of the season there (58.9).

* Overall, Clemson posted its third-best offensive grade of the season (81.3) with its strongest rating Saturday in the passing game (82.2).

PFF named Greene its true freshman of the week after leading Clemson defensive regulars Saturday with an 87.3 grade. “With Clemson being without a few key guys in the secondary, Greene was thrust into the starting lineup and excelled,” PFF’s Anthony Treash said. “The freshman locked down the slot for the Tigers, with just two catches allowed for 24 yards; he came away with an interception, a forced incompletion and a passing stop en route to an 85.5 coverage grade for the game.”

Goodrich is another Tiger who stepped in when needed and graded well (79.2), getting his hands on two interceptions and allowing only one catch in four targets his way.

Skalski making an impact is no surprise but it is impressive after speeding up his comeback from injury (groin) to plug in and get three stops in six tackles and a QB hurry.

* Not surprisingly after a four-pick game, Clemson’s coverage graded well (80.5; third-best of season) on what rated as the third-best defensive effort overall this season (81.7). Down one of its highest-grading defenders (Derion Kendrick, disciplinary reasons), the unit recovered from its two worst efforts in back-to-back games with Boston College (51.6) and Notre Dame (52.9).

* In more limited snaps, linebacker LaVonta Bentley (96.4 grade) stood out with a sack, forced fumble and two total stops over five plays, and Jordan Williams (94.5) also impressed with two QB hurries in seven plays after being honored with the seniors pregame.

Mascoll was dinged for a missed tackle and registered two QB hurries in his 24 snaps for a game-low 41.8 grade.

Continuing the trend for Clemson’s young D-ends, the true freshman posted his season-low grade (54.7) with one tackle in 32 snaps.

Bockhorst rated the lowest among offensive starters (56.5) and PFF had him in the category of linemen struggling in the run blocking (61).