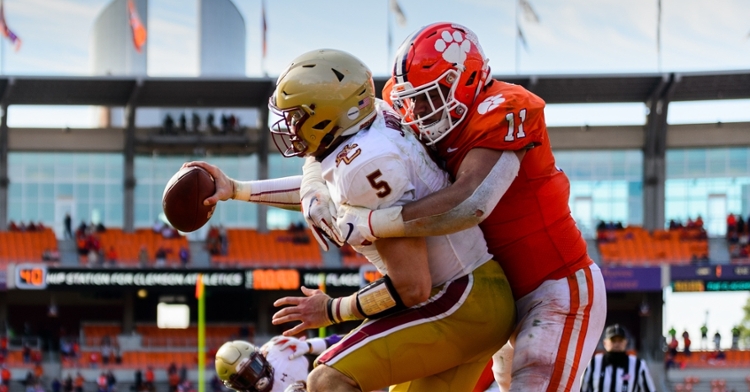 No. 1-ranked Clemson rode a historic rally to stay undefeated this season, topping Boston College 34-28 heading into a trip to No. 4 Notre Dame this week. We take a deeper look into the game with the help of Pro Football Focus:

Powell’s time to shine is here and he was the freshman QB DJ Uiagalelei’s main target on Saturday with a career-high 11 catches for a career-best 105 yards. He led all Tigers on offense in grading (79.1) and six of those catches went for first downs.

Etienne continues to amaze in his versatility and making plays when he may not have the easiest path to doing so (more on that down below). Etienne was the second-highest skill-position grade (78.7) with a 90.9 mark in the passing game after seven catches in 10 targets for 140 yards and a score there. Exactly half of his rushing yards came after contact (43) and he contributed another TD in that phase of the game. The lone blight was on the fumble at the goal line, which came on an awkward exchange between him and the freshman QB.

By now, it’s just commonplace that a talented freshman QB will step in and make an impact out of the gates for the Tigers. Uiagalelei’s debut was fantastic though, grading fourth-best on the offense overall (76.9). Despite some conservative playcalling early, Uiagalelei still averaged eight yards per pass attempt with 30 completions in 44 dropbacks and two touchdowns to zero interceptions. He was 9-of-14 for 175 yards in throws of over 10 yards (both TD passes coming from throws closer to the line of scrimmage). Under pressure, he connected on 4-of-7 attempts for 68 yards and a TD -- and when not facing a blitz, Uiagalelei graded at 90 passing with 19 completions in 26 passes for 220 yards.

* On the other hand, the Tigers graded their third-best overall offensively (73.3) with strong marks in pass blocking (90.3) and passing (81.6) and the second-best grade as a receiving corps (69).

* Taking an early look ahead, Notre Dame has the eighth-rated defense by ESPN’s SP+. They are coming off of their second-highest grade as a defense this season for PFF (77.8) in a 31-13 win at Georgia Tech Saturday. Their pass rush graded out at a season-best 82.4 there.

The elder Spector posted by far his highest grade of the 2020 campaign to lead the Clemson defense Saturday (84.9) with six tackles, five stops, two QB hits, a forced fumble and QB hurry. He graded a 91.8 in run defense.

Also answering the call in an injury-depleted position was Jake Venables, who stepped in at middle linebacker for a second-straight week and graded second-best on defense (78.5). Venables totaled five tackles with a couple stops, a QB hurry and batted pass and giving up just 10 passing yards in two targets his way.

Bresee capped off the comeback by overpowering a BC blocker to force a safety. He graded third-best on the defense overall (73.6) with three QB hurries, a QB hit and stop in 55 graded snaps.

* Especially early, it was a forgettable day for the Clemson secondary with a season-worst grade in coverage (59) -- and correlating a bit there was the second-worst day as a pass rush (61.5).

* Brent Venables’ group tried to make up for pass D deficiencies in the ground game, where they rated above 90 (90.7) with a third-best tackling effort on the season (68.8).

* Again peering ahead, the Fighting Irish rank 16th nationally in offensive SP+, but quarterback Ian Book is coming off two of his worst grades of the season. He posted a 41.1 mark as a passer at Pittsburgh recently and then 58.9 at Georgia Tech. Compared to 2019 (77.9), Book is grading at a 63.7 rate this season overall and 57.6 as a passer.

He graded a team-low 42.6 on five pass coverage snaps, targeted three times and giving up two catches for 30 yards.

Galloway graded the lowest on a Clemson offense that didn’t go too deep into the bench against BC (47.2), without a catch in one target his way and a 50.6-mark in 22 run blocking situations.