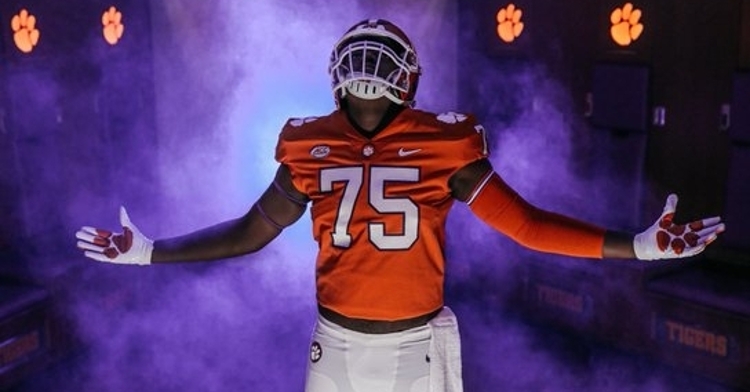 Collins poses during his Clemson visit.

Jaydon Collins has known about Clemson his entire life, and a visit for the Tigers’ junior day gave him even more information.

Collins (6-6, 270) is a 2021 3-star offensive tackle out of Greer (SC) who is coached by Tiger great Will Young. Collins is also the son of Jason Collins, who played tight end for the Tigers and graduated in 1997.

He doesn’t hold a Clemson offer yet, but that might just be a matter of time.

Collins competed in Dabo Swinney’s high school camp last summer and made the trip to Clemson two weekends ago with his parents.

“It went great. Everything was good,” Collins told TigerNet. “The campus was beautiful and the positive energy from the players and the coaches and all of their families was warm and welcoming.”

He also had conversations with Swinney and offensive line coach Robbie Caldwell.

What did he want to see while he was on campus, and did it bring back any memories for his father?

“I just wanted to see the facilities and tour the campus and I got to do that. It is a beautiful place. It's crazy how beautiful it is,” Collins said. “He definitely had some flashbacks to some old memories that he was telling me about. He told me it was good to see the campus and some of those places again.”

The rest of his schedule – for now – remains in limbo but he would love to make a decision before the end of his senior season.

“With everything going on right now, I had to throw my schedule in the trash. But I do want to come back to a game this fall,” he said.

“The head coach is all about fun and winning,” he said. “Clemson is an amazing school. Power 5 national championships two out of three years.”