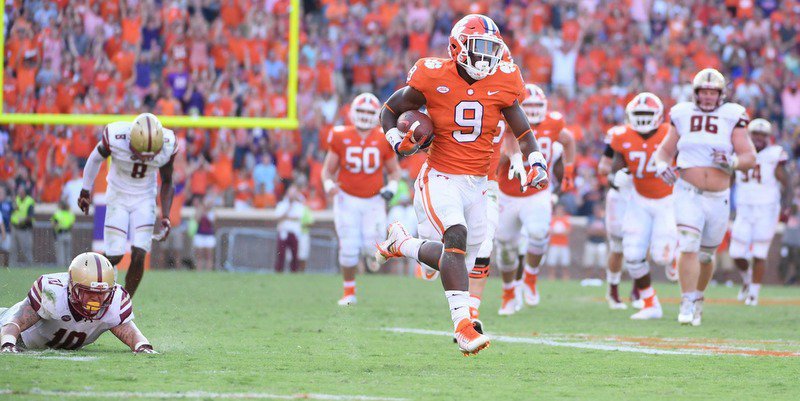 Etienne had 113 yards in the win over Boston College

CLEMSON – When in doubt, run the ball.

With Clemson’s offense struggling to move the ball and score points all afternoon, the Tigers turned to the running game, Tied 7-7 in the fourth quarter against Boston College, No. 2 Clemson (4-0, 2-0 ACC) rushed for 164 yards in the final stanza and scored 27 points en route to a 34-7 victory over Boston College (1-3, 0-2 ACC) in Death Valley Saturday afternoon.

Quarterback Kelly Bryant and running back Travis Etienne each recorded 100-yard games – Bryant had 22 carries for 106 yards, while Etienne carried it nine times for a game-high 113 yards. Overall, Clemson gained 482 total yards of offense, including 58 rushes for 342 yards.

“I was a little frustrated because I thought we were going to finish on a few drives early, but I knew it was going to be a tight first half. I felt like we could eventually wear them down, and we scored 27 unanswered points," Clemson head coach Dabo Swinney said. "And that’s what good teams do when they finish the right way in a hard-fought game. At the end of the day, you’ve got to play four quarters, and that’s what our guys did. We stayed patient. We tried not to get frustrated. We had a couple of turnovers that hurt us. But we had 368 rushing yards, which made all of the difference.”

Swinney said he was pleased with the fourth quarter.

“We had a huge turnover and a huge punt return," he said. "We had several great passing plays, and [Tavien] Feaster and [Travis] Etienne were amazing in the ground game.”

Boston College head coach Steve Addazio said he was proud of his team, but worries that the Eagles might be too beat up to capture any momentum.

“We took this team, that’s the No. 2 team in the country, late into the fourth quarter. Our kids played their tails off. That’s the storyline of the game," Addazio said. "I thought we went after them with everything we had. I thought we made plays on offense, we made plays on defense, and I’m proud of the way our kids fought and battled against this team. This team that’s one of the best, if not the best, team and one of the best, if not the best, defenses in the country...and we had them nose-to-nose. Those are the facts.

“What I want you to hear from me is the truth, which is that we battled hard and played tough. We wanted to drag this team into the fourth quarter, and we drug them into the fourth quarter. We played with great heart and you can see the potential in this football team right now. The key right now, though, is having enough guys to come out of this thing and let that work for us. We’re hoping we’re not going to be so crippled that we’re going to have a hard time with that.”

The teams played a scoreless first quarter, and the Clemson offense lacked a little bit of everything in garnering just three first downs. Three of the four drives started inside their own 10, and Boston College’s missed field goal kept the game tied.

The Tigers finally got on the board midway through the second quarter, and they did on the strength of the running game. An Eagle punt pinned the Tigers at their own six, but Clemson covered the length of the field in 13 plays. Eleven of the 13 were running plays, and Bryant ended the drought with an 11-yard scoring run, and Clemson led 7-0 with just over seven minutes to play in the half.

That was it, however, as 13 first downs and 222 total yards of offense led to just the one touchdown and led 7-0 at intermission.

Clemson’s offense continued to sputter in the second half. A promising drive early in the third quarter ended with another interception, and the Tigers continued to start drives deep in their own territory.

A punt and a nice return gave the Eagles the ball at the Clemson 37, and it took them eight plays to tie the score. A.J. Dillon rumbled in from a yard out, and it was 7-7 with 3:30 left in the third quarter.

Another ineffective drive led to another punt by the Tigers, but the defense forced a three-and-out and Boston College was forced to punt. Clemson took over at its own 33, the best field position of the day. Quick slants got the offense moving, and a 23-yard fade from Bryant to Diondre Overton placed the ball at the Eagle six-yard line.

One play later, Adam Choice carried two Boston College defenders into the endzone, and Clemson led 14-7 with 11:59 to play.

Clemson forced another Boston College punt, and once again Clemson had terrible starting field position, taking over at their own ten. It took them nine plays to find pay dirt, and all nine plays were runs. Freshman Travis Etienne continues to show why he deserves to play more, breaking two tackles on his way to a 50-yard scoring run and Clemson led 21-7 with 5:41 to play.

Clemson forced another Boston College punt, and the 54-yarder pushed Ray-Ray McCloud all the way back to his own 20. McCloud ran to the left sideline, broke a tackle and sprinted 56 yards to the Boston College 24. Four plays later, Bryant scored from four yards out, and Clemson led 27-7 with 2:50 to play.

A.J. Terrell ended the ensuing drive with an interception, the first of his career, at the Boston College 41 with 2:22 to play.

Etienne capped his fantastic day with a 10-yard scoring run with 52 seconds remaining that made it 34-7.

Clemson travels to Virginia Tech next weekend for an 8 p.m. start against the Hokies. Both teams are 4-0, and it will be a rematch of last year’s ACC Championship.

Clemson vs. Boston College Box Score
Comment on this story