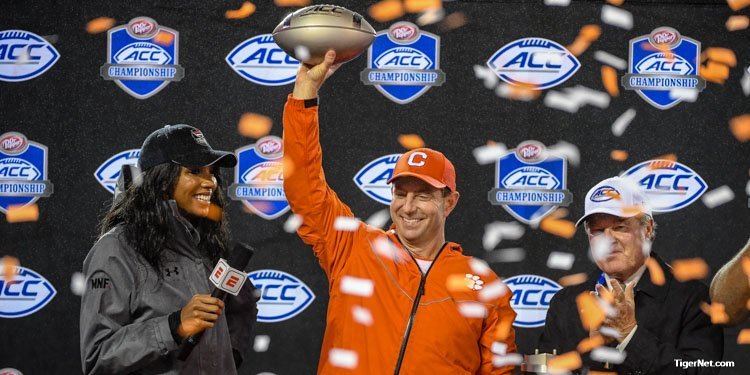 CLEMSON – The names are familiar to all college football fans. The numbers are staggering.

No. 2 Clemson is making an appearance in the College Football Playoff for the fourth consecutive season, and the seniors who have been around for a while have compiled an amazing resume. Those Tigers are preparing to play in their sixth playoff game, and have played in an Orange Bowl, a Fiesta Bowl, a Sugar Bowl, and two National Championship Games. They will add the Cotton Bowl in a week, and players told the media last week that they chose Clemson for times like these.

“I want to play for a program that obviously competes for national championships. That was, I wouldn't say that's my number one goal as far as where I wanted to go, but that was definitely high on my list and I'm obviously at a place here that does that,” quarterback Trevor Lawrence said. “And then I was at the Army game watching this game last year when they played Alabama and it was cool to see them there. But also I kind of envisioned next year when I'm there, having that same opportunity.”

Offensive lineman Gage Cervenka grew up a Clemson fan and says he can’t believe what he’s been able to do.

“It's been a dream come true,” Cervenka. “This is a once in a lifetime opportunity. I always joke around with friends at home and tell them we are a part of the best teams Clemson has ever had. The best is yet to come. No one would have thought this was possible years ago and I am enjoying it. I am along for the ride. The whole experience has been incredible.”

Tremayne Anchrum says he knows he will have plenty of stories to tell in the future.

“It’s an experience. You don’t really appreciate it when you’re there, but afterward, you are like wow, this is a really special thing,” Anchrum said. “Not everybody in the world gets to do this. And we’ve played some great teams. At the time it’s just another opponent, but now you have a lot of stories you can tell your friends and your kids. That’s a lot of talking pieces down the road. You can say, ‘Hey, I played Notre Dame at AT&T Stadium.' That’s big and it’s something that you can carry with you the rest of your life.”

Playing in games like the Cotton Bowl are why Anchrum chose Clemson.

“That’s the ultimate goal here, is to play in games like this,” Pollard said. “They tell you when you come here that if you do things the right way you will wind up in games like this and they’ve held to every word they said. Coach Elliott says it all the time, that this is why we came here, to play in these big games.”

Tight end Milan Richard said he understands how fortunate the Tigers are – he has many friends in the state who haven’t had the same kind of success – but also knows that Clemson has reached the pinnacle because of hard work.

“We are definitely blessed here at Clemson,” Richard said. “But Coach (Dabo) Swinney always says that you get what you earn, and it goes back to summer conditioning and the weight room and everything we do in the summer to get to this point. And then we carry that into the season, and it shows once the season starts."