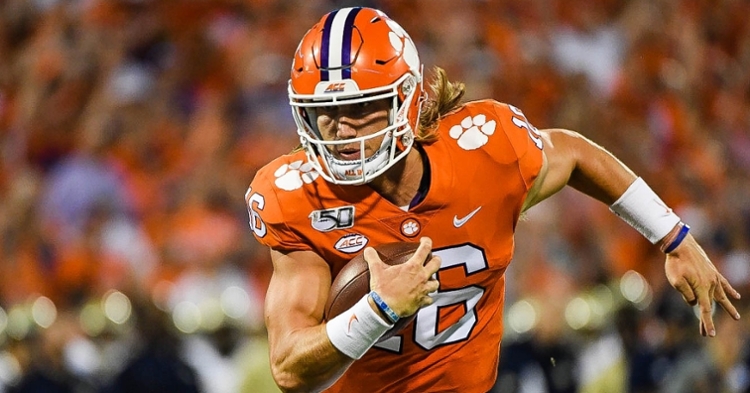 Lawrence is happy the Tigers are 1-0 with Texas A&M heading to town next weekend.

CLEMSON – Trevor Lawrence didn’t play his best game in Thursday night’s win over Georgia Tech, but don’t think the talented sophomore is worried about his next start or what happened against the Yellow Jackets. Why? Clemson won the game and that’s all that matters.

Lawrence completed 13-of-26 passes for a touchdown and two interceptions and also ran for another touchdown. After Lawrence’s dominating postseason, many expect him to put up video game numbers every game, but he sees the big picture for a young team still finding its way.

“We responded to adversity and that's always good to see from a team like this,” Lawrence said. “We lost so many guys from last year and we are a young team but we have good leadership. It was good seeing this kind of fight. Some things didn't go our way but we came back and responded.”

With the passing game stifled to a degree, Travis Etienne and the running game stepped up – Etienne ran for a career-high 205 yards in the win.

“The offensive line did a great job and so did Travis. They were playing a lot of two high (two safeties in the middle of the field), which is not what we expected after watching film of their spring game and watching what they did at Temple,” Lawrence said. “So, they changed it up a lot, so they kind of forced our hand as far as running the ball. Which is fine because we have a great offensive line and great running backs. We had to run the ball a little bit more than we thought we would. They (Tech) did a good job but our line and running backs did great.

“We had some sloppy plays, especially me, in some areas. So it was great that Travis ran the ball so well and the line blocked so well.”

The Tigers won the season opener, and that was the only number Lawrence cares about.

“We won. That is the most important thing for me. That is the main goal is that we won,” he said. “So, I am happy with that. But there are definitely some things I can learn from, which is going to be the case every game. Especially this game.

“Like where the corner kind of jumped it and just learn from that. The second interception was just before the half and I was scrambling and trying to not go out of bounds and take those lost yards right there, so I tried to throw it away and it came out funny and I left it inbounds. Threw it right to him. It is stuff like that, just the little things like that. Other than that, we had a good start and won by a lot. We played great and responded to adversity so I think it was a great day. We did everything we needed to do to win.”

Lawrence was asked to assess his performance and he reiterated his team-first perspective.