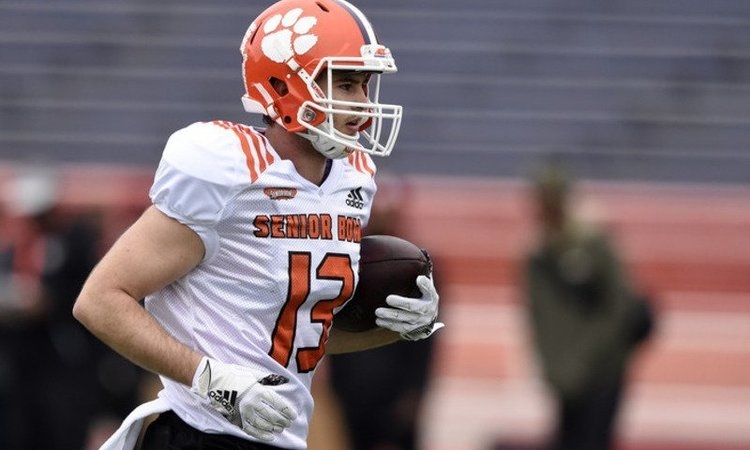 Hunter Renfrow has done all he can do. For now.

Clemson’s celebrated and decorated former walk-on wide receiver spent last week at the Senior Bowl in Mobile, Ala., and finished the week by leading his team with five catches for 63 yards. He also added an impressive punt return, and he told TigerNet Sunday that he was pleased with the entire week.

“It was great. It was a lot of fun. It was really busy at the first part of the week just between the meetings and learning a new offense, just the verbiage and the way they say things in the NFL, meeting with the teams,” Renfrow said. “As the week progressed, it got a lot more relaxed and a lot more fun in the sense that you could meet the guys that you watched play prime time football over the last four or five years and just kind of put a name with a face.”

Which players did he spend time with?

“A bunch of guys. Gardner Minshew who played for Washington State and Mike Leach was one of our quarterbacks. I got to talk to him a good bit.,” Renfrow said. “We were talking about Mike Leach and his stories. We talked a little bit about Coach Swinney and my stories. It was cool to relate to that guy and talk football and talk life with him.”

Renfrow said his dream of playing in the NFL is closer than ever.

“It does. It's always been real in my mind,” he said. “Kind of like when I was in high school, I dreamed about playing at Clemson and although it was a dream and something I never expected, I could see it vividly in my mind that it was going to happen. It's sort of the same way. I've always dreamed about playing in the NFL. I've gone through it so many times in my that I can see it in my mind.”

Renfrow said he thinks he spoke with every NFL team in attendance, but one thing that stood out to him was the talent from across the country.

“There are great players at all schools. It doesn't matter if you're UC-Davis in California or Texas A&M. There are great players everywhere,” Renfrow said. “It's just fun to be able to compete against those guys. Another thing I took away was we have great people at Clemson. While there's talent everywhere else, I feel like what I went against every day in practice prepared me for this moment.”

Renfrow said he has a month of workouts in preparation for Clemson’s Pro Day on March 14.