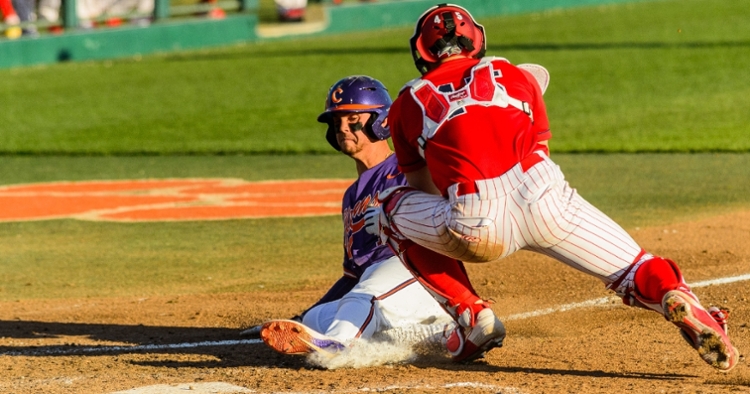 Clemson just missed out on scoring a run here (Photo by David Grooms).

CLEMSON – Have yourself a game Elijah Henderson.

The Tigers couldn’t put anything together offensively Saturday against Stony Brook, but Henderson capped a big day in which he reached base in all five plate appearances with a run-scoring single in the bottom of the tenth as Clemson won 1-0 at Doug Kingsmore Stadium.

Clemson improves to 6-0 with the win while Stony Brook falls to 1-4. The Tigers will go for the series sweep Sunday.

Mac Starbuck drew a one-out walk in the bottom of the tenth, and Kier Meredith drew a walk to put runners at first and second with one out. Henderson worked the count and then drove a 2-1 pitch over second base to score Starbuck with the winning run.

Clemson had just four hits on the day, two of them in the tenth.

The Tigers didn’t have a lot of chances to score early. There was a two-out walk in the first, and Dylan Brewer led off the third with a walk but was stranded at second. Elijah Henderson continued his hot hitting with a double to lead of the fourth, but the meat of Clemson’s lineup couldn’t move him as far as third.

Clemson put two runners on base in the sixth. Henderson walked with one out and stole second. Adam Hackenberg walked with to put runners at first and second with one out, but Bo Majkowski struck out and Chad Fairey grounded out to second to end the frame.

Clemson starter Davis Sharpe was outstanding in his six innings of work but didn’t figure in the decision. He gave up just five hits and struck out six. He didn’t issue a walk.

Keyshawn Askew relieved Sharpe and walked the first batter he faced on four pitches and the next batter reached on an infield single. Askew induced a groundout that moved the runners into scoring position and struck out the next batter for the second out, and head coach Monte Lee relieved Askew with Sheldon Reed. Reed struck out the final batter to end the threat.

The Tigers threatened in the seventh. Bryar Hawkins was hit by a pitch to lead off the frame and advanced to second on a balk. Brewer reached on an error, moving Hawkins to third. Sam Hall hit a shallow fly ball down the right-field line that the right-field caught near the fence in foul territory. Hawkins tagged up and was called safe on a bang-bang play at the plate, but a video reviewed overturned the call for the second out. Mac Starbuck ended the inning with a grounder to the pitcher.

Reed got one quick out in the seventh but grabbed his arm on 2-2 pitch to the second batter that went about 45 feet before bouncing. Reed doubled over in pain and was immediately removed from the game. He was replaced by Nick Hoffman.

In the bottom of the ninth, Hawkins drew a one-out walk and was replaced by pinch-runner Pierce Gallo. However, Brewer bounced into an inning-ending double play sending the teams to extra innings.

The finale of the three-game series is set for Sunday at noon, with Spencer Strider on the bump for the Tigers. Clemson plays one mid-week game this week, on Tuesday at 4 p.m. at home against East Tennessee St. The annual rivalry series against South Carolina is that weekend.

The first game is Friday at 7 p.m. at Founders Park, game two is Saturday at 3 p.m. at Columbia’s Segra Park, and the finale is Sunday at 2 pm at Doug Kingsmore Stadium.