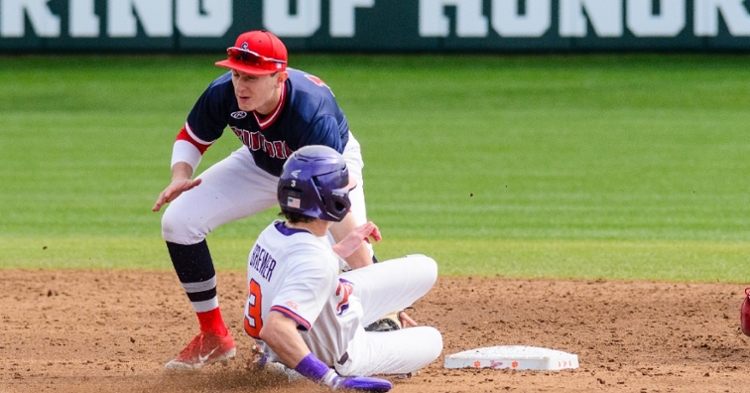 CLEMSON – Clemson needed a big hit in the worst way Sunday afternoon, but it turned out a walk worked just as well.

Tied with Stony Brook 1-1 in the bottom of the eighth, pinch-hitter Bryar Hawkins drew a two-out, bases-loaded walk to force in a run and the Tigers earned the sweep with a 3-1 victory at Doug Kingsmore Stadium Sunday afternoon.

Clemson improves to 7-0 on the season while Stony Brook falls to 1-5.

Strider, still on a pitch count after offseason arm surgery, threw 49 pitches (32 for strikes) in 2 2/3 innings of work. He gave up three hits, walked none and struck out five. Mat Clark relieved him for the second week in a row.

The Clemson offense continued to struggle, managing just one hit through the first four innings. Dylan Brewer singled with one out in the fifth and promptly stole second base. The throw from the catcher bounced past the second baseman and into center field, allowing Brewer to take third.

DeGennaro was lifted after running into trouble in the sixth. Davis Sharpe worked a two-out walk and stole second on the first pitch. With Adam Hackenberg at the plate, DeGennaro was replaced by Brandon Bonanno. Bonanno’s second pitch bounced to the plate for a wild pitch and Sharpe took third with ease. Hackenberg worked a walk to put runners at first and third for Chad Fairey, who was 0-for-11 on the season heading into the at-bat. Hackenberg took second on a 2-2 pitch to Fairey that was wide to put both runners in scoring position, but Fairey struck out to end the threat.

Clemson’s 33-inning scoreless streak ended in the seventh. John Tuccillo singled up the middle to start the inning, and Johnny Decker dropped a bunt in front of the pitcher’s mound that was fielded by Clark. Clark’s throw to first got by Fairey, allowing Tuccillo to take third. Shane Paradine fouled out to deep right field and Tuccillo scored the Seawolve’s first run of the series to make it 1-1. Derek Yalon bounced out to second for the second out, and Monte Lee went to the pen for Carson Spiers with Decker at second.

Spiers got the final out, and Clark finished his day with four innings pitched. He gave up two hits, one run (unearned) and struck out four while walking none.

Bonanno was replaced by Adam Erickson, who induced a grounder from Teodosio. Teodosio hustled down the line and beat the throw, scoring Davis for the 3-1 lead.

Spiers pitched the final 2 1/3 innings in picking up the win. With the tying run at the plate and two out in the ninth, Bo Majkowski made a catch as he ran into the wall in foul territory in right for the final out.

Clemson plays one mid-week game this week, on Tuesday at 4 pm at home against East Tennessee St. The annual rivalry series against South Carolina is this weekend.

The first game is Friday at 7 pm at Founders Park, game two is Saturday at 3 pm at Columbia’s Segra Park, and the finale is Sunday at 2 pm at Doug Kingsmore Stadium.