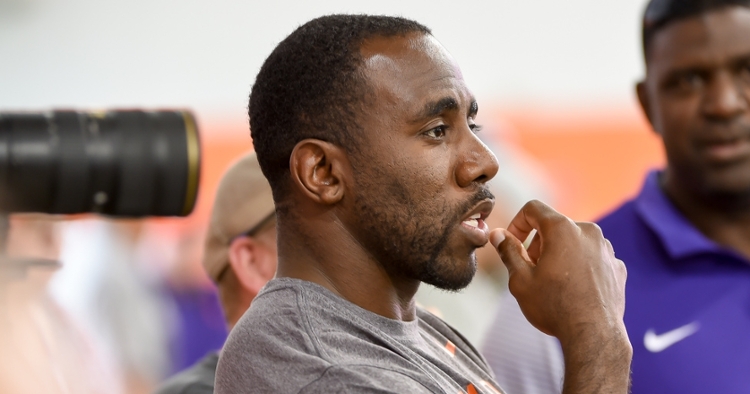 Spiller will be inducted into the Clemson Hall of Fame this fall.

CJ Spiller took his dogs out to be groomed one day last week, and when an unfamiliar number called him later in the day, he figured it was the dog groomer. He was wrong. It was Clemson’s Bob Mahony calling with the news that Spiller was being inducted into the Clemson Hall of Fame.

Spiller joins former baseball coach Jack Leggett, former Clemson and NBA player Trevor Booker, and five others as members in this year’s class, which will be honored this fall.

“I normally don't answer calls that I don't have programmed in my phone. It was Tuesday because I had taken my dogs to get a washing,” Spiller told TigerNet. “That's who I thought it was, them calling me to tell me to come pick them up. So I picked it up and that's when he (Mahony) notified me about the selection, that I had been chosen to be inducted into this year's class.”

The secret was a tough one to keep for a week.

“I guess with everything that's going on with the virus and everything, it was tough,” Spiller said. “He told me they're going to put out a press release this week, but I didn't know it was going to be Monday because I know he wanted to contact all the rest of the inductees and notify them. But it was definitely tough that week. Trying to keep it a secret and I never want to come across putting stuff on my social media as a guy that I guess you'd say tooting his own horn.”

Spiller said he isn’t surprised by the selection because he wrote down his goals as a seven-year-old in Florida.

“These are some of the goals and the dreams that I wrote down as a little kid,” Spiller said. "My mom actually still has that same note that I wrote down when we had bunk beds. And I look at it every night. And the biggest thing that I always said, obviously at the bottom of that paper was NFL, but between the bottom and the top of that paper, it was a lot of dreams, goals that I wanted to do for myself. And a couple of them was, I wanted to leave my high school as the best ever I wanted to go off to college and leave that program as one of the best ever. So, there were just dreams as a little kid, so they always tell you as a kid, dream big and I was dreaming big.

“She has it locked up in a room. It's like a little nice little notebook sheet of paper that I just wrote down everything that I wanted to accomplish in my life. And like I said, the thing that I know for sure that I wrote at the bottom, I put NFL in big capital letters and I circled it probably about eight times. But it was a lot of stuff that I wanted to accomplish growing up as I was getting older.”

Spiller put together a stellar freshman season in 2006 as he ran for 938 yards on 129 attempts for an average of 7.3 yards per carry while finding the end zone 10 times on the ground. The 2009 season, his senior year, was Spiller’s best as a Tiger. Spiller rushed for 1,212 yards ad 12 touchdowns. He also caught 36 passes for 503 yards and four touchdowns. It was the first time an ACC player topped 1,000 rushing yards and 500 receiving yards in the same season. Those numbers made Spiller a unanimous first-team All-American and earned him the honor of being the ACC player of the year.

Spiller said he doesn’t consider himself one of the greats in Clemson history. He’s merely a brick.

“I've never really sat back and thought about where I'd be if somebody made up Mount Rushmore of Clemson,” Spiller said. “If I'm considered one of the greats, I mean that's great stuff for people to print and write about it. That's great. Barbershop talk. But me personally, I don't sit around and think about all the greats. I always just consider myself like a brick. Like you build a house.

“You are one brick, it's a process to everything. And in each process, something has to go on top of that other process. So, I'm just standing on the shoulders of men that came before me at Clemson and hopefully my shoulders are broad enough for the guy that's coming behind me. My mindset is, I just tried to do my part while I was at Clemson, kind of just help our class, that 2006 class, do something that had never been done.”