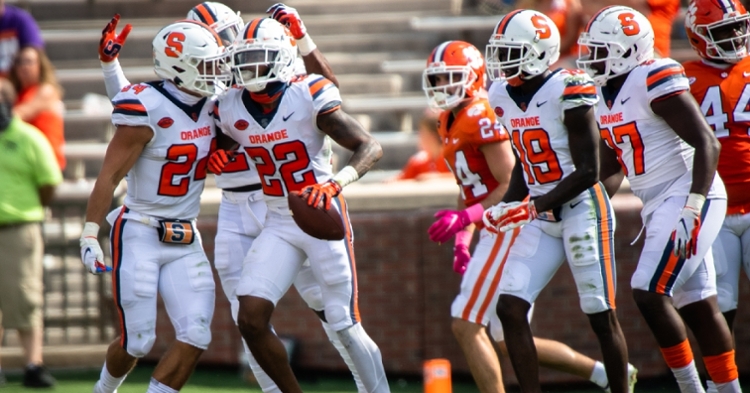 Clemson played the first half like a team thinking it would win big. In other words, another ugly performance against Syracuse.

The top-ranked Tigers hold a 27-14 lead at halftime of a game in which they were favored to roll. A blocked punt, dropped passes, players limping off the field, and a pick-six all hurt the Tigers in the first half.

PLAYER OF THE HALF: Senior wide receiver Cornell Powell had a big impact in the first half, making critical catches to extend drives and battling through an injury after he fell awkwardly on his shoulder. Powell finished the half with two catches for 45 yards and a touchdown.

STAT OF THE HALF:Neither team gave up a sack in the first half and there were only three tackles for loss – two for Clemson and one for Syracuse.

The Tigers had 310 total yards of offense, which isn’t quite what it was last week at Tech but is strong. The Tigers had 52 plays and 17 first downs, strong numbers which would suggest a larger number of points. Ten receivers have caught a pass. BT Potter nailed a field goal to end the half, and the Tigers were able to put together a scoring drive at the end of the half after giving up the pick-six.

Lyn-J Dixon has run well, and had a 49-yard kickoff return to open the game.

*Turnover – Trevor Lawrence had another uncharacteristic interception – his second in as many weeks – late in the second quarter. Lawrence tried to hit Amari Rodgers on a seam route, but the ball was a little behind Rodgers, who tipped it in the air, and it led to a pick six. Lawrence wasn’t as sharp as he has been this season, completing 20-of-32 passes for 203 yards and two touchdowns.

*Special teams – Will Spiers had a punt blocked in the first half when Syracuse brought more than Clemson could block. Later in the half, kicker B.T. Potter missed a 37-yard field attempt.

*Dropped passes – Clemson’s wide receivers had several dropped passes in the first half that led to stalled drives. In order to create some continuity and flow on offense, Dabo Swinney said his offense just needs to make the plays that are there.

*Pick-six off of Lawrence. Quarterback Trevor Lawrence threw his second interception in as many weeks, this one behind Amari Rodgers near the hash late in the first half, and the ball bounced off the hands of Rodgers and into the hands of Garrett Williams, who returned it 39 yards for a score.

*Blocked punt. For the second time in three weeks, the Tigers had a kick blocked. This time it was a punt inside the Clemson 30-yard line, and it led to the first Syracuse touchdown.

WHAT CLEMSON NEEDS TO DO TO WIN:

Clemson needs to find some kind of pace and rhythm offensively. The offense has sputtered and spluttered and the offensive line has failed to pick up rushers at key times. The Tigers need to get the ball down the field to open up the offense, but most importantly, run the football with Travis Etienne. Etienne has had his moments (he also fumbled early) but needs more touches. On defense, the Tigers need to close off the middle of the field.