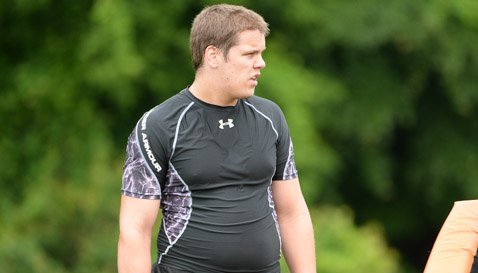 View Full Profile spent most of last week at The Opening at Nike’s world headquarters n Beaverton, Oregon, and he the 2015 Clemson offensive line commit from Boiling Springs feels like he more than held his own.

Green said that being chosen as one of the best players in the nation was an honor, and he feels like he benefitted from the experience.

“It was so much fun. I feel like I really benefitted from that camp,” Green told TigerNet this weekend. “I learned a lot from being there, getting coached from some of the best guys in the nation that know more about what they're talking about than I ever have. It was great to get to go against some of the best defensive linemen in the nation and get a feel for some of the competition that I'll be going against over the next few years.”

He said he also learned a lot from his two coaches – former NFL players Montrae Holland and LaCharles Bentley.

“I had two offensive line coaches. Montrae Holland LaCharles Bentley,” he said. “They were great and they taught me a whole lot.”

Green then said that he didn’t have many doubts that he would more than hold his own against the nation’s best defensive line prospects.

“I tried to go out and not be cocky, but I was confident,” he said. “I did my best. I got beat a few times and I won a few times. In the end, hopefully I got better because that was the goal.”

View Full Profile , regarded by many as the nation’s top offensive line prospect.

“We roomed together. I was with him the whole time,” Green said. “It was good to get to know him a little bit better. “I think he's going to be a great player. He's going to play for a long time.”

Next up for Green is the All In Cookout, the annual chance for committed players and prospects to spend time with the Clemson coaches and players in a relaxed atmosphere.

“I'll be in Clemson next Friday for the All In Cookout,” Green said. “I came last year and it was a lot of fun. I'm bringing my family this year and we'll just get to hang out with the coaches and everybody else and just get to know everybody.”