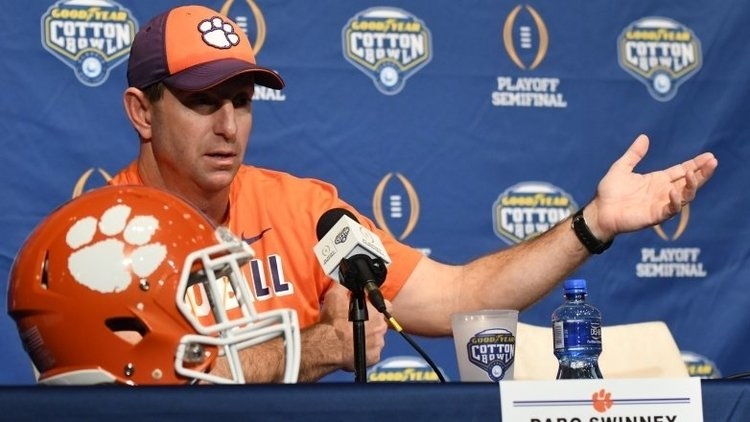 Earlier in the day the ACC announced the revamped fall sports schedule and that included Clemson’s football schedule. As I followed the paws onto campus Wednesday evening, it felt like football might actually be on the horizon for the first time in a while.

In case you missed it, here is how football in the ACC shakes out:

*The season’s first games will take place the week of Sept. 7-12

*All non-conference game opponents, selected by the respective school, must be played in the home state of the ACC institution, and all non-conference opponents must meet the medical protocol requirements as agreed upon by the ACC

*There will be one division

*All television revenue for the 2020 season, including Notre Dame’s home games broadcast by NBC, will be shared equally by all 15 institutions

*The ACC Football Championship Game will be played on either December 12 or 19 at Bank of America Stadium in Charlotte, North Carolina, and will feature the top two teams based upon highest conference-game winning percentage

*All 15 teams will continue to be part of the ACC’s bowl selection process; should Notre Dame win the ACC Football Championship Game they would be eligible for the Orange Bowl, if not selected as a College Football Playoff semifinal team

The staff at TigerNet has some quick reactions to the announcement. We will dive a little deeper into the schedule once the dates are released.

It didn’t take long for one of Clemson’s opponents to accuse the ACC of trying to protect the Tigers. One of the writers at Warchant.com, which covers Florida State, took to Twitter to air his grievance. Ira Schoffel said, “Pretty cool that the conference protected Clemson by not making them play UNC, NC State or Duke this year ... “

I think he was trying to be funny, but there is no doubt that anyone and everyone will try and throw a little shade the Tigers’ way, no matter what happens.

*Speaking of the Wolfpack, unless the teams meet in the ACC Championship Game this will mark the first time the Clemson and NC State won’t meet since 1970. The Pack might not have a problem with that – Clemson has won eight in a row in the series and 15 of the last 16.

*I found it intriguing that a lot of folks are already assuming Clemson will face Notre Dame twice this season – once in South Bend and again in the ACC Championship Game. Don’t forget that Notre Dame has to travel to Chapel Hill to take on UNC, and winning there isn’t a given. We’ve all seen too much college football to think it all play out just like we foresee it in late July or August.

*I also like the fact that Clemson gets to see some teams from the Coastal Division that it normally doesn’t play in Virginia Tech, Pitt, Miami, and Virginia. However, the Tigers have played each of those teams in the ACC Championship Game in the last four seasons, an interesting twist to the schedule.

*Mark me down as a big fan of the one division concept and allowing the two top-ranked teams to meet in the championship. If that had been the case in previous seasons we would have had some games that were more interesting.

*And finally, I know what the ACC is trying to accomplish with Notre Dame. But I really hope there is announcement soon that the Irish are joining the ACC in football full time. I hope there is more than meets the eye to this.

* In the pandemic, I’ve been in one mode on Clemson’s potential scheduling for fall or spring: Is it football? (Yes.) Cool, I’ll take it. I don’t care if Notre Dame is just in the league as a full member for one year or one hundred years. I don’t care if it’s home-and-away or pods or the same ole divisions -- I just want conferences to hone in on the best ways to protect players, coaches and more in the potential college football games ahead...and then find a way to get us to the games. There are still several important decisions ahead and we have to get through camp practices to these games. There have been positive signs in some American sports leagues and what happens in MLB and NFL will fall closer to what we might see in college football this fall. Here’s hoping we see this schedule come to be.

* Potentially having all Power 5 teams play double-digit Power 5 opponents in a season is a fascinating development for whatever the College Football Playoff ends up being. And ditching divisions is another really fun aspect specifically to the ACC. I love the idea of taking the top-two teams and mixing things up for Clemson to play Virginia Tech and Miami for the first time since 2017 (and a first time hosting the Hurricanes at home since 2010) and an early home revenge redo versus Pittsburgh. If the ACC were to permanently ditch divisions, I would be in favor of keeping NC State as a yearly opponent though and we won’t get that game this year (barring a miracle Wolfpack run to Charlotte).

* On Notre Dame: It’s funny how the league and Notre Dame and the TV partners (ESPN and NBC) found a way for things to work out on revenue. For the Fighting Irish, they know they can make more money being in the ACC football scene full-time. It’s not necessarily about money for them. In the current economic climate though, getting that taste of revenue might just be enough to bring to fruition what so many clamor for going forward.

* Had to do a metrics-related thought: Notre Dame (12) draws the other two highest-rated teams in the league by ESPN’s preseason SP+ with hosting Clemson (3) and heading to North Carolina (17). Despite some preseason hype, their trip to Charlotte is far from guaranteed and North Carolina gets to avoid Clemson in the regular season -- and their next toughest games might just be regular divisional opponents with a Virginia Tech (home) or Miami (road). On the other end of the spectrum, No. 95 Syracuse faces all three of that top trio on the road. Good luck, Dino.

*I’m both relieved and thrilled. I’m relieved because after weeks of negativity it appears we’re on track to have a college football season. Avoiding the rumored pod system, and in particular playing the same opponent twice during the regular season, is another relief.

I’m thrilled because Clemson’s schedule actually got better. It was previously ranked as the second-weakest of all Power Five teams. This change replaces Louisville, NC State, Akron, and The Citadel with Miami, Pittsburgh, and Virginia Tech. Clemson will still play Notre Dame, but now as a conference game. It appears the Palmetto Bowl will happen too. Now, it will be the most appealing schedule the Tigers have had since 2016.

*Notre Dame’s inclusion as a conference member is especially interesting. Many would have liked to see the ACC play hard ball and force the Fighting Irish to join the league permanently or be left off the schedule, but the reality is the ACC and Notre Dame are business partners. Notre Dame maintaining a strong program that draws big crowds and TV ratings benefits the ACC. They will be sharing TV revenue this year too. They’re Clemson’s only top-tier opponent and with this agreement the conference maintains its most interesting game of the season.

*Obviously having a full slate of seven home games with packed stands is what’s best for the town of Clemson and the athletic department coffers, but that hope was probably out of the picture a while ago. Eleven games against Power 5 opponents will make for an even more intriguing product on the field than in a typical year. Perhaps it’ll be hard to go completely back to the way it was before and ACC football will be more fun for years to come as a result (more on this in a future article). It’s hard to feel anything but grateful right now!