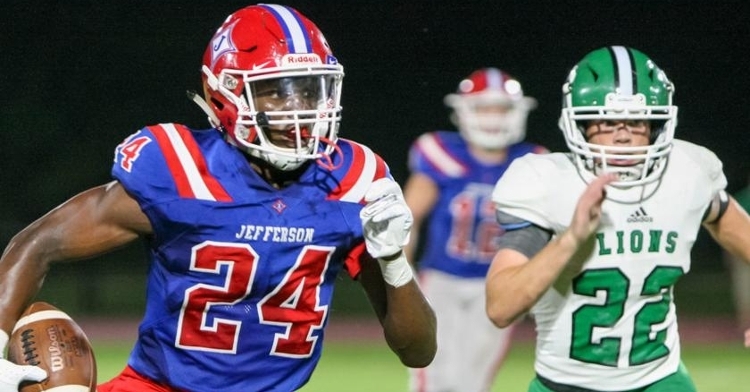 Malaki Starks can play all over the field but Clemson wants the 4-star Georgia star as a safety.

The 6-foot-2, 196-pound 2022 prospect out of Jefferson (GA) played quarterback, running back, wide receiver and defensive back last season in his high school’s wing-T offense.

Starks picked up a Clemson offer earlier this week.

“The coach who offered me was Coach Mickey Conn, the free safeties coach. Me and him have been talking for a while and he told me a long time ago that they aren't allowed to offer any 2022 prospects at the moment,” Starks said. “But he told me that once he was allowed to I would be his first safety and he told me I was a big priority at Clemson. Some of my family went to Clemson and they love Clemson and that offer was very special. It's amazing. I can't wait to go up there and look at the campus.”

Starks has family that attended Clemson – including Jerome Williams, who played for Danny Ford – and loves what he sees out of the coaching staff.

“One thing I think is big is leadership and I see that a lot there,” he said. “That is why they can be so successful all the time. Coach Swinney is very big on leadership and that is something that Coach Conn has told me. I just love it. I love how they compete and the pageantry of the games.”

Next up? A visit.

“I would like to make a visit as soon as I can. I am really looking forward to getting up there and getting to know everybody and getting on campus,” Starks said.

Starks has been a star in the secondary and at running back. Last fall, he rushed 53 times for 544 yards and five scores. He also had eight catches for 157 yards and two more touchdowns. Defensively, Starks had 27 total tackles, two for a loss, five interceptions, three pass breakups and a fumble recovery.

Conn likes Starks as a safety.

“It feels good. But I am not real big on attention,” he said. “I just want to play ball and leave it at that.”

After a terrific sophomore season, Starks was named Honorable Mention Class AAA All-State team. He was also named Athlete of the Year on the GHSA 8-AAA All-Region team.

After a conversation on the phone with Coach Conn, I am truly blessed to receive an offer from Clemson University. pic.twitter.com/UliPP9QroP