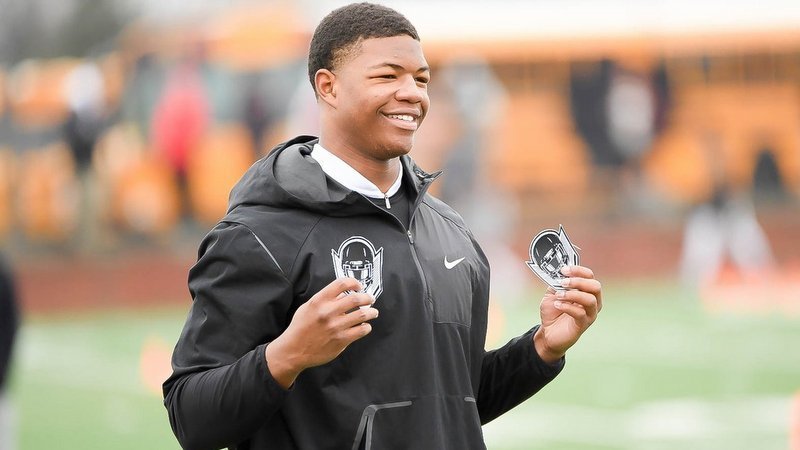 BUFORD GA - Athletes, parents, and media all complained about the cold and blustery conditions at Buford High School Sunday afternoon, but if there was one person who didn’t seem to mind the 30-degree temperatures and gusty winds, it was 2019 defensive end Nolan Smith.

The Bradenton (FL) IMG defensive end and Georgia commit scored in the 98th and 99th percentile in the testing portion of Nike’s The Opening Regional and wowed spectators with his size, athleticism and explosiveness before being named Defensive MVP and earning an invite to The Opening in Dallas, Texas.

While Smith is still a solid commit to the Bulldogs, there is one school that’s never too far from his thoughts.

“It's certain things about Georgia and just the defense that they run,” Smith told TigerNet Sunday afternoon. “I feel like I'm a 3-4 outside linebacker but I’m playing in the 4-3 system right now and I'm working, I'm working just fine. And they are still in it, but it's kind of hard because I really want to play in the 3-4 defenses, but I just can't, it's just some reason that I just can't stop thinking about Clemson.”

The family feeling and laid back atmosphere have kept Clemson at the forefront of Smith’s recruitment.

“I’m a chill type of guy, and they said after the workout they just chill, play games and everything like that,” Smith said. “It's not like most colleges, where boys go out and party and stuff like that. They say that's not Clemson, and I feel like that's the type of environment I want to be in. You know, we are family, and we work together. Like at IMG, most people don't know we spend most our time together, like we're a real brotherhood, because we spend seven days a week not just at practice, in school, we live with each other.”

If there’s one thing that Clemson has that Georgia doesn’t, it’s two former IMG teammates in linebacker Mike Jones and defensive end Xavier Thomas, both of whom stay in constant contact.

“Yeah you know, I got off FaceTime with Xavier (Thomas), I think it was two nights ago. You know just talking to them, and it’s a lot going on up there, I really like it there’s a lot going on in the right direction, and it's in a good way. You know they say it’s like a spot for me. But you know they tell me that because they are already there and stuff like that.”

“I hear from them a good bit. You know Coach Swinney and Coach (Todd) Bates stay on the DM, the text messages,” Smith said. “Coach Venables, he's the most consistent of them all, that’s why that's why I feel bad that I forgot his name. You know, like they say, it's a real family up there, and that’s how I want to feel when I go to school, and that's the vibe I really get from them”

Smith said that he hopes to make it to Clemson for a visit over the summer and possibly for the spring game on April 14.