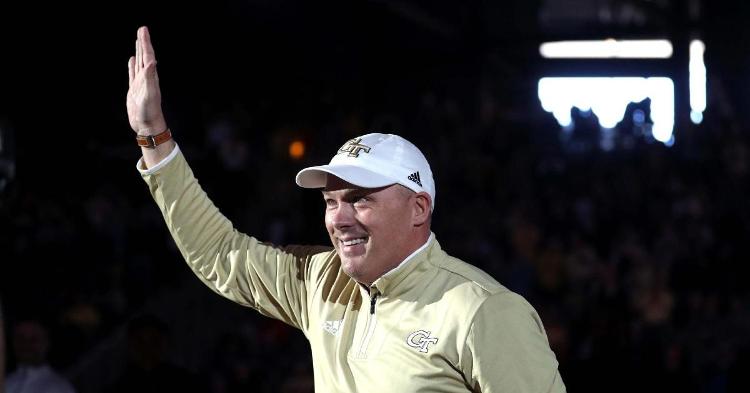 CLEMSON – Georgia Tech opens the 2019 season on the road against the nation’s top-ranked team, on a Thursday night, with a new head coach and a new system. They’re also 36-point underdogs, but don’t expect new head coach Geoff Collins to use the underdog role as motivation or utter “shock the world” pronouncements. He knows what the Yellow Jackets are facing and he has taken a page out of Dabo Swinney’s playbook.

“We have to worry about us,” Collins says.

“Great deal of respect for Clemson. A great deal of respect for their players and their coaches,” Collins said this week. “But we don’t worry about any of that. All we worry about is us and the people that will come here every single week will get bored with this answer but it’s completely true. I don’t know other than putting up what they do schematically on offense and defense – here are their blitz patterns, here’s what they do offensively as far as formations and concepts – that’s what we talk about. We don’t really talk about our opponent much. We have a great deal of respect.”

“We understand what a great job they’ve done with players and with coaches and recruiting and all those things, but we have to worry about us,” he said. “Because this has been a complete transition of a football program, unlike a lot that have happened in a long time. And so we’re just completely focused every day on being a culture that’s built on effort and our guys playing ridiculously hard. Competition is king whether we’re playing pool in the player’s lounge or on national TV against a great team.”

The next buzzword? Family.

“We are going to compete at every single thing that we do and we’re going to be a family. We’re going to have bonds forged through shared adversity,” Collins said. “We’re going to put them in stressful situations, whether it be over there at practice or whether it be in a workout, and they’re going to become closer together because of the stressful situations and opportunities for them to grow as a family. And those things help you play at a high level, play really good football, and at the end if you play really good football and you play really hard and you compete, things naturally take care of themselves so that’s our complete focus.”