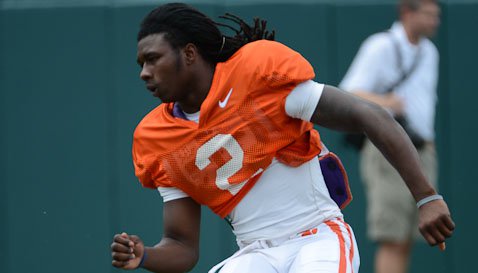 The Deuce is Loose, and the Paladins get to be the first team that wide receiver Sammy Watkins

Tajh Boyd
RS Jr. Quarterback
#10 6-1, 225
Hampton, VA
View Full Profile told me this week that Watkins is stronger, seems faster, and knows even more of the playbook this season, and that he has been itching to get out on the field and put the off-season turmoil behind him.

However, the number 29 is unusual in Clemson history because there are some other streaks that reached 29, and then ended.

•The Clemson record for consecutive home men’s basketball victories is 29 set between Jan. 8 1989 and Dec. 8, 1991. The last win in the streak was against Wisconsin-Green Bay, whose starting point guard was current Virginia head coach Tony Bennett.

•The Clemson record for consecutive men’s singles wins by a men’s tennis player is 29 by Pender Murphy in 1980.

However, the return of Sammy doesn’t bode well for the Paladins, who are coming off two close losses, the latest a downer to Coastal Carolina in triple overtime that dropped them to 0-2 on the season.

This week, the Paladins travel up 123 to take on the Tigers and witness first-hand the return of Mr. Watkins. Lucky them.

FURMAN AT NO. 11 CLEMSON

WHEN FURMAN HAS THE BALL

Furman quarterback Reese Hannon – a Greer High School graduate where he played for the Yellow Jackets under former Tiger Will Young – makes his first career start Saturday. Hannon grew up a Tiger fan, and he will have plenty of family in the stand cheering him on. Hannon came off the bench late in the second quarter following an injury to starting quarterback Dakota Derrick and proceeded to pass for 255 yards and four touchdowns — all in the second half and in the overtime frames. He completed 22-of-35 passes and threw scoring strikes covering 10, 21, 22, and 25 yards while directing Furman to touchdowns on its final six possessions. He will be looking for receiving targets Colin Anderson, Will King and Ryan Culbreath. However, look for the Paladins to try and establish the running game, running away from Stephone Anthony

Stephone Anthony
So. Linebacker
#12 6-3, 235
Polkton, NC
View Full Profile whenever possible. This could be the week we see even more of freshman Travis Blanks

Tony Steward
So. Linebacker
#7 6-1, 235
Hastings, FL
View Full Profile could see plenty of snaps at the WILL spot. They will all be tasked with stopping Jerodis Williams, who rushed for 1,055 yards last season. The key, however, could be how much pressure the defensive line gets on Hannon – the Paladins have allowed five sacks through the first two games. Look for plenty of Blanks and Anthony, and maybe even a little Steward mixed in.

Andre Ellington
RS Sr. Running Back
#23 5-10, 195
Moncks Corner, SC
View Full Profile didn’t get a ton of work last week, and quarterback Tajh Boyd was out just over midway through the second quarter. Add Watkins into the mix, and the Tigers have a need to get some key players in a rhythm before next week’s trip to Tallahassee. The Clemson offense was explosive in Watkins’ absence, but it was noticeable that the offensive playbook was limited. Gone were the wide receiver sweeps, and the option of wideouts carrying the football, even though there was an attempt with Adam Humphries

Chad Morris
Offensive Coordinator / QBs
View Full Profile opens up the playbook, and how much he wants to spring on Florida St. Furman’s pass defense has struggled so far this season, and they might think about dropping an extra linebacker back in coverage to defend the pass and defend against Watkins. If they do that, it opens up the running game for Andre Ellington and Clemson’s running backs. I look for Morris to establish the run, but work Watkins into the game plan early as well. Ellington, Watkins, Hopkins and company should all get plenty of touches in the first half and in the third quarter.

Clemson missed an extra point following the first touchdown last week, but that was really the only negative in a performance that saw Spencer Benton

Bradley Pinion
Fr. Punter
#92 6-6, 230
Concord, NC
View Full Profile came in and was solid in his first action as a Tiger. The Tigers also get to add Watkins into the mix at both punt return and kick return this week. The Paladins’ Ray Early handles the field goals, kickoffs and shares the punting duties with Ben Granger.

The Paladins have always been known as one of those FCS teams that give the big boys fits, and anyone who has ever been around the program knows about the wins over Georgia Tech, North Carolina St., North Carolina and South Carolina in the 80’s and 90’s. However, these aren’t your father’s Paladins, and head coach Bruce Fowler is in the process of trying to re-shape the program, and defensively they just don’t have the horses to stay with the Tigers. Dabo Swinney says that Furman’s defense may be more athletic than what the Tigers saw in Ball St. last week, but that isn’t say much because the Tigers could have scored 80 if Swinney had left the starters in. This one will see some excitement in the return of Watkins, and maybe even a big play or two before the starters once again give way to the reserves.