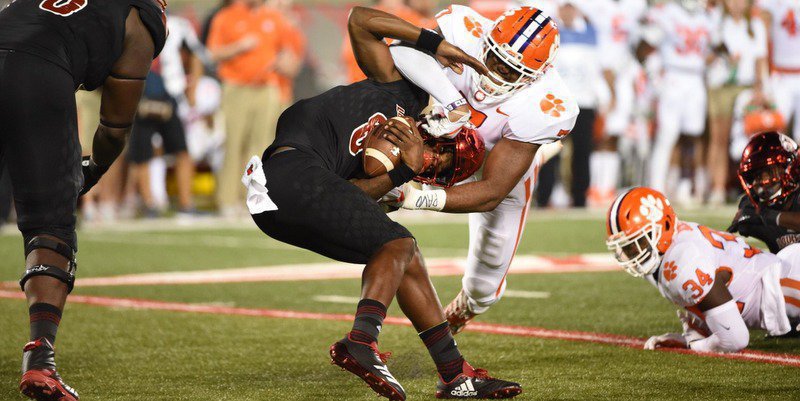 Quarterback Kelly Bryant was impressive in his first road start. Bryant had a career-high 316 yards passing on 22-32 passing. He was 6-9 for 99 yards on third down after going 6-7 against Auburn. Bryant added 26 yards rushing and two scores for a career-high 342 yards of total offense.

The Tigers finished with 613 total yards of offense, ran 81 plays and had 35:32 in time of possession. Louisville had 433 yards of total offense, but most of that came in the fourth quarter against a heavy dose of Clemson reserves.

Tavien Feaster had 10 carries for 92 yards, while Ray-Ray McCloud had seven catches for 115 yards.

“First of all, that's a great start for us in ACC play, obviously a huge division win," Clemson head coach Dabo Swinney said. "Anytime you can go on the road and win, it's a big boost for you. We still have a lot of work to do and another big division game next week, but it takes a lot of mental toughness and focus to be able to go on the road and win. We had two goals tonight, one was to get the job done and the other was to leave no doubt. We felt like we left a little doubt in the past couple of years."

The Tigers won the toss and deferred, and the move worked as Clemson stopped Louisville on the game’s opening possession. The Tigers took over on their own 21 and marched down the field in 10 plays for the first score. Bryant shook off two defenders and rumbled eight yards into the end zone for a 7-0 lead.

Two possessions later, Louisville put together its best drive of the half, driving 95 yards in just six plays and scoring when Lamar Jackson hit Charles Standberry from 11 yards out to tie the game at 7-7.

Clemson added a 31-yard field goal by Greg Huegel to break the deadlock and go ahead 10-7 with just under seven minutes remaining in the half.

On the ensuing possession, Bryant hit a wide-open Ray-Ray McCloud for a 79-yard scoring pass. McCloud slipped out past the safety and ran unchecked into the secondary. Bryant hit McCloud in stride at about the Louisville 40 and McCloud raced into the end zone for the touchdown. The extra point was blocked, and Clemson led 16-7 with just over four minutes remaining in the half.

The 79-yard play was the longest offensive play for the Tigers since November 2, 2013, when Tajh Boyd connected with Sammy Watkins on a 96-yard scoring pass at Virginia.

Louisville failed to generate any offense on its next possession, and a punt allowed Clemson to take over with 3:17 left in the half. Eleven plays and 49 yards later, Huegel hit a career-long 49-yard field goal and the Tigers led 19-7 at intermission.

Clemson’s initial drive of the second half stalled in Louisville territory, and a punt saw Louisville take over at its own 20. Jackson appeared to get loose for a 50-yard run that wound up inside the Clemson 20. However, Standberry was called for a chop block on the play, nullifying the run. Two plays later, Dorian O’Daniel picked off Jackson and ran it back 44 yards for a touchdown and 26-7 lead. The touchdown was the first of O’Daniel’s career.

The turnover was the first of the season for the Clemson defense, and the first turnover of any kind for the defense since the Fiesta Bowl win over Ohio St. Jackson had thrown 108 passes this season without a turnover.

Clemson continued to pour it on. Another Louisville drive fizzled, and Clemson took over at its own 34. Eleven plays later – many of them tough carries by Feaster – Bryant slipped untouched into the end zone to cap a one-yard scoring run and Clemson led 33-7 with 3:31 remaining in the third quarter.

Despite the fact that many fans in the announced crowd 55,588 (second-largest in stadium history) had departed the premises, Louisville showed life on its next drive and Jackson hit Jay Smith on a 36-yard scoring pass that made it 33-14 with 13:45 to play.

It took the Tigers exactly four plays and 79 yards to answer. Bryant had a 33-yard pass to Diondre Overton on third down and Adam Choice put the dagger in the Cardinals’ heart with a 39-yard scoring romp down the right sideline that made it 40-13.

Louisville refused to go away, however and put together an 11-play, 85-yard drive that ended with another Jackson scoring toss that made it 40-21 with 7:37 remaining.

The Tigers put in several reserves on the ensuing possession, and two penalties put Clemson in a hole. It took freshman Travis Etienne one play to get them out of the hole and answer Louisville’s touchdown. Etienne spun out of the grasp of one defender and raced 81 yards for the touchdown.

“Last year, against these guys, we turned it over five times. We came up here a couple years ago and gave up a kick return to the house," Swinny said. "We just wanted to play good, sound, complementary football tonight and we did that in all three phases. Hats off to the guys, to our staff, we had great preparation, that's a great football team (Louisville), they're a big-time challenge. We were able to possess the ball and limit their possessions, something we weren't able to do last year. We played great field position. Our punt game, we averaged over 50 yards a punt. Coverage was outstanding from a kickoff standpoint and we knocked down a couple field goals. But, it really was a great performance, we had 600-plus yards offensively. I love how we rushed the ball, we had some big throws and catches. Kelly (Bryant) was awesome, the big stat for Kelly was that he was 6-for-9 on third downs.

"We had some big-time third downs, we made some big scramble plays and that's something that he 's obviously got the ability to do. We ran the ball well, effectively and efficiently. All those guys were awesome. Big contributions in the passing game, as well. Ray Ray (McCloud) had a career-high 115 yards and a big-time touchdown. We had one touchdown called back and we missed a kick, so we had some things that we left out there. But, we just had a lot of contributions from a lot of guys, we brought 72 (players) on the trip and we played 70. It's a happy locker room in there. Defensively, we had one really poor drive in the first half, but we settled in and played pretty good football outside of a couple cheap ones that we gave up in the fourth, which was disappointing that we had a couple busted coverages where guys weren't where they were supposed to be. A lot of guys got some good experience and there's a lot that we can improve from. But, I'm just really proud of them, we had ten tackles for loss, six sacks. I hate that we lost Tanner (Muse), but to see Isaiah Simmons go in and play the way he played was really, really good. Just really proud of these guys, we're 3-0 and that's where we wanted to be, but we have a lot of improving to do."

Clemson vs. Louisville Box Score
Comment on this story