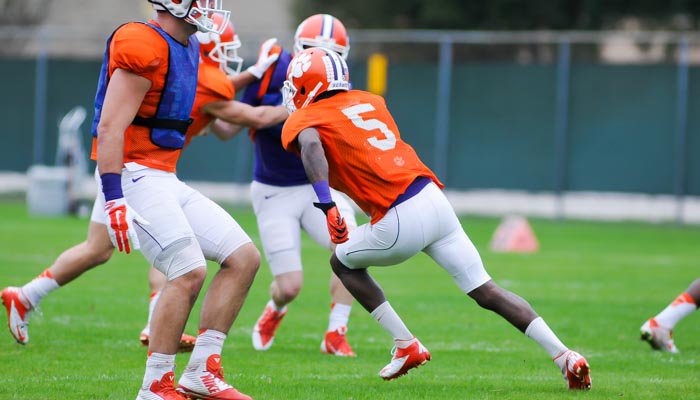 ORLANDO, FL – The Clemson football team practiced in the shadow of the Citrus Bowl Friday afternoon, the team’s third practice in the bowl city.

The Tigers practiced on Thunder Field, a grassy field that sits next to a parking lot for the stadium and as the players filed onto the practice field linebacker Kellen Jones

The accommodations may not have been as nice as the stadium itself, but the Tigers got in a lot of special teams work and Clemson may have found an answer at punt returner next season. During the session we were allowed to watch, receiver Artavis Scott

Artavis Scott
Fr. Wide Receiver
#3 5-11, 190
Oldsmar, FL
View Full Profile was returning punts and he was electric. It’s funny how people knew that Scott – coming out of high school – wasn’t the fastest player on the field, but when the football is in his hands he finds another gear.

Jordan Leggett
So. Tight End
#16 6-5, 251
Navarre, FL
View Full Profile did not participate in the practice session. The coaches are hopeful that Leggett can play in the bowl game, but he walked into the facility along with fellow tight end Stanton Seckinger

The duo spent time on a bench with quarterback Deshaun Watson

Deshaun Watson
Fr. Quarterback
#4 6-3, 204
Gainesville, GA
View Full Profile , and Seckinger called out to one passerby that, “this is a sad, sad group over here.”

At one point, a tourist helicopter began circling the field and the rumor quickly spread – facetiously – that the Sooners were filming the Clemson practice.

*Bowl practice usually brings out the who’s who of guests and Friday’s bowl practice was no different.

First off, Ray Ray McCloud III attended practice with his father. He spent a good bit of time talking with other recruits and watching co-offensive coordinators Tony Elliott

Three other Clemson commits were also in attendance – quarterback Tucker Israel, who has been a frequent visitor to the Citrus Bowl sports complex, was at practice with his parents, offensive lineman Jake Fruhmorgen was there with his dad and tight end Garrett Williams was also in attendance.

Robbie Caldwell
Assistant Coach / Offensive Line
View Full Profile at Vanderbilt. The 6-5, 275-pound lineman only has one offer from South Florida, but is garnering interest from several programs in the ACC and SEC.

Former Clemson linebacker Eric Sampson (2001-2005) was at practice with his daughter.