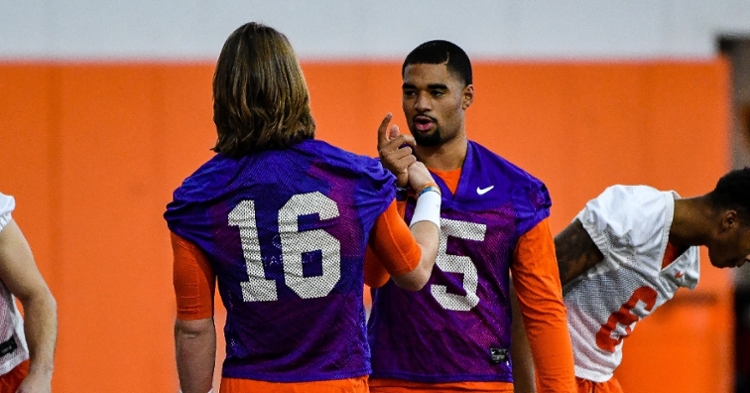 CLEMSON – The road to Miami starts with practices like these.

Clemson held the second practice of the spring Friday afternoon, and it’s still just shorts and helmets. That means we have a lot of information to pass along after being allowed to watch the first six periods.

I will start with the defense. I spent probably too much time watching the defensive line. 2020 defensive tackle commit Tre Williams was there, too, watching the proceedings. He is good friends with Bryan Bresee, who is already making an impression in camp. Bresee was wearing a green (limited) jersey today, but he went through every drill without missing a beat.

One of the first drills was the slant drill where they line the players up under a chute (which sits on a frame). The chute is maybe three-and-a-half feet off the ground, and the players line up underneath it and explode out of their stance without hitting the roof of the chute. Bresee came out one time and hit his head on the roof and defensive tackles coach Todd Bates made him do it again. Bresee, obviously mad at himself and the knee brace, went back and came out with the kind of explosion you don’t see out of freshmen.

One former NFL player – a defensive guy – looked at me and laughed and said, “That kid can come off the rock like nothing I’ve ever seen. Not at that age.”

Bresee then worked with defensive ends coach Lemanski Hall, and he loves getting into the tradition, low to the ground, four-point stance. It’s amazing how he can get as low as he does, but it’s a thing of beauty.

Greg Williams is another one who is impressive. Head coach Dabo Swinney told us the other night that Williams finally looks like a football player, and he’s right. He has length and that huge wingspan and you can tell it’s finally all starting to come together.

Defensive tackle Darnell Jefferies – I wrote about his battle with diabetes a few weeks ago – looks the best he’s looked since he’s been on campus.

Xavier Thomas is another one that to me just looks different. It’s not like he looks bigger or anything like that, he is just carrying himself differently. During drills, he was all business and was going 100 percent all the time. I think we are all going to see his best this season.

And then there’s Myles Murphy. Murphy came out of stance (his first step is incredible) and hit his opposite number with violence (named redacted to protect the innocent and violated) and it was obvious there was pain involved. As I’ve said, this defensive line is going to be different this season.

Nikki also had some observations as she roamed:

EJ Williams is just smooth in everything he does - route running, catching passes. If you didn't know he had only been in college for a month, you wouldn't believe it

*Amari Rodgers showed no signs of any mental scar tissue going through drills without the knee brace. He did everything full speed. Swinney said that Rodgers is “all gas, no brace” and it shows.

*Clemson fans need to enjoy watching Travis Etienne for one more season because he looks like he should be on an NFL roster today. It also looks like he's taking a little more of a leadership role.

*Sheridan Jones, Fred Davis, and LeAnthony Williams really caught my attention with their speed and footwork. Speaking of corners, Derion Kendrick looks primed to be Clemson's next lockdown corner.

*At linebacker, Baylon Spector, Mike Jones, Jr., and LaVonta Bentley really jumped out. Spector is so quick and moves his feet well. Jones just looks like your prototypical Clemson linebacker. A year in the system has really done Bentley a ton of good. He moved effortlessly through drills and again just looks like what you want in a linebacker from a physical standpoint.

Swinney smiled after Wednesday's practice and said, "This is a really good looking football team."

*We understand we have baseball and softball getting ready to start, so we will have more news and notes over the weekend.