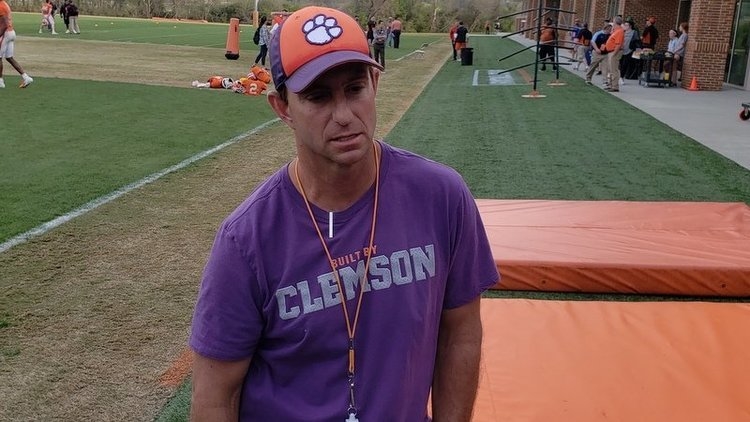 Swinney talks to the media after Friday's practice

Several players were seen being held over after Tuesday’s practice – running up-downs, extra sprints and rolling down the field – and with just a few practices left before next week’s spring game, head coach Dabo Swinney says it’s gut-check time for his team.

“Today was a tough practice for them, but I thought they pushed through it well and had a good strong finish. Monday will be our last day as a unit and we will have a Wednesday half-scrimmage and then we will split the teams and play the game Saturday,” Swinney said. “Today was a really critical practice as far as what we are trying to finish up with. I see our defensive line getting better. I thought Xavier Kelly had his best day today. Darnell Jefferies is getting better. Tyler Davis and ET and Ruke - they have made a lot of progress. A long way to go but they are coming and I'm encouraged by what I've seen from those guys. That has been our focus, to get those guys some reps that haven't really played.”

“Better than the first scrimmage. Still good and bad on both sides,” he said. “It was competitive. Too many drops. Still jumped offsides too many times. But improvement. I was encouraged b both sides on what I saw, but still a long way from being game ready or anything like that. But we are making progress, and today was a gut-check type of practice.”

*Derion Kendrick continues to play both cornerback and receiver, and Swinney smiled when he said threw Kendrick in during 1-on-1's. "He's a legit dude. That is a nice luxury for us, that could be a starter for us on both sides of the ball. We are going to continue to work him like we've been doing and see how it works out as we head into the season."

*Kendrick told us he intercepted Trevor Lawrence during his first scrimmage at corner. He simply smiled and didn't get into too many details, but said he did what he had to do.

*Swinney says he thinks wide receiver Amari Rodgers (torn ACL) will play this season. Swinney said that Sam Cooper and Chad Kelly tore their ACL's during the spring game and played early the next season. He said it's all up to the player, but he thinks Rodgers will be back early in the schedule.

“Yeah. Absolutely. Everybody responds differently to those types of injuries. But it really comes down to the person and how they react to rehab. Amari doesn’t do anything halfway. He will be back. It’s part of his journey and he will embrace it. We will see where he is in fall camp. We won’t rush him back, but he will do everything he can to get ready.”

*Wide receiver Diondre Overton has caught Swinney's eye. "He has the chance to play at the next level. He got banged up today and might be out a few days, but he will be okay. But he has made some big plays for us."

*Freshman wide receiver Brannon Spector is wearing No. 13 (Hunter Renfrow), but Swinney says the two are different types of receivers. "He is a lot bigger than Renfrow. He's stronger. He runs good routes and has great hands."

*Lefty punter Aidan Swanson drew praise from Swinney, and Swinney says the Tigers will get more than one turnover during Swanson's time simply because the ball comes off his foot different than it does a right-footed punter.

*Swinney said he hopes the fans show up for the spring game. He said it's important that the younger players get to play in a game atmosphere, and it's also big for recruiting. "Some of these kids, it might be the first or only time you get them on campus. But really, for our team, and just using it as a great tool. Very few people will have a spring game environment like we have here, and to me that gives us a big edge in the mental prep for our players."

*Running back Tavien Feaster had two long runs in the scrimmage and Swinney says Feaster looks the best he’s looked since he’s been on campus. “He has blinders on and he is really locked in.”