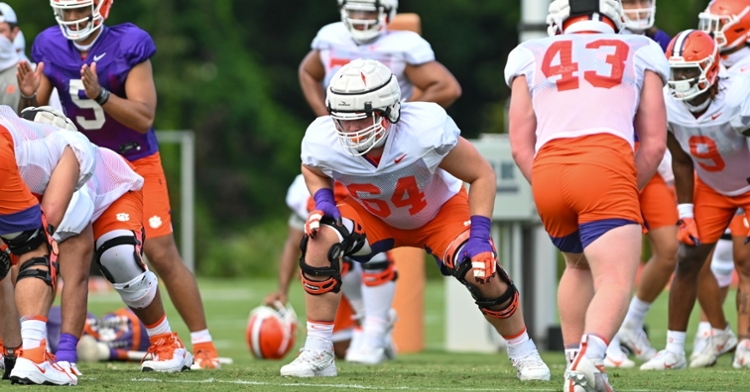 Walker Parks is one of the talented freshman offensive lineman. (Photo courtesy of CU Athletics)

The first scrimmage of fall camp is scheduled for Saturday, and it’s a big one for the freshmen who want to make an impression on the coaches.

Redshirt sophomore offensive lineman Jordan McFadden is now considered a veteran – he enters 2020 having played 332 snaps over 17 career games. That includes 315 snaps over 14 games a year as he played backup at both tackle spots. This season, McFadden is penciled in as the starter at right tackle, and he’s looking forward to the scrimmage.

“I think the scrimmage is very, very big and very important. At practice, the coaches are right behind you so they can guide you through plays,” McFadden said Friday. “At the scrimmage, they are going to be out of the way and everything is going to be full-speed and people are going to be playing full-speed. It's a matter of people showing what they can do, especially some of those freshman offensive linemen showing the coaches that they can be trusted and they know what to do and how to do it. And physically that they can do it, especially for the offensive linemen.”

The Tigers have to replace four starters along the offensive line and the scrimmage also offers a chance for the new starters to build chemistry.

McFadden wants to be the best lineman in the ACC, but he also has bigger goals in mind.

“Camp is going pretty well. I am excited to be back and excited to get going. I am ready to play ball. Overall, I am enjoying it and I feel like I am doing pretty well,” McFadden said. “I feel like I am a guy who is always willing to learn and I work hard. I will admit that when I first got here, understanding the playbook wasn't something I was good at. But over time I studied and got some of the older guys to really help and become knowledgeable about what I need to do and how to do it and things like that. Through my time here I have put in the work and I feel like they have put a lot of faith in me because of how I have worked and the things I can do. And now I am knowledgeable, too, and I think that helps a lot.

What other freshmen are standing out?

So he definitely stood out to me and things like that. Mikey Dukes is standing out. And then just like the freshman lineman, Walker Parks, Mitchell Mayes, Bryan (Bresee) is physically doing really well. You know, it takes a while to get in the playbook and know everything about the back of your hand. But physically, those guys are doing pretty well.”