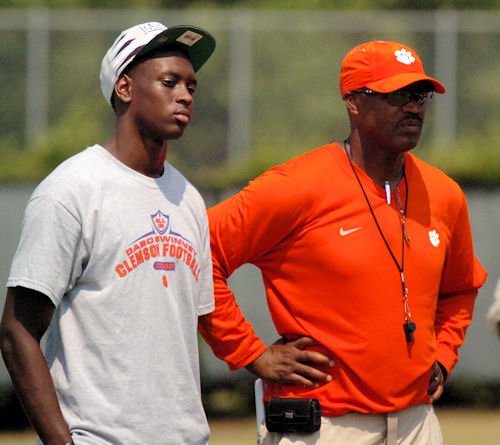 View Full Profile wandered the sidelines of Dabo Swinney’s Camp on Thursday, and eventually wound up talking to his father about his decision to commit to the Clemson Tigers.

Turns out that dad was of the same mind as his son, and Geohaghan followed Swinney into his office after camp and told him the news: he wanted to be a Clemson Tiger.

“I went up to his office and told him and he was very excited,” Geohaghan told TigerNet following his decision. “He told me to represent Clemson in everything I do, and to do all of the right things. I had talked to my dad while we were out on the field, and he told me I had made the right decision in his mind, but to do what was best for me.”

Geohaghan had more than a dozen offers, and more would have come over the summer, but he said he felt like Clemson was the only place he felt at home.

The 6-2, 190-pounder projects at both safety spots and possibly at nickel back for the Tigers, and his new position coach – Charlie Harbison – told him Wednesday night that he had a feeling a commitment was forthcoming.

“He was very excited when I told him I was thinking about it Wednesday night,” he said. “He said he had always had a feeling I was going to come here. He told me to set goals for myself in the weight room, the class room and the field and come to Clemson ready to play.”

As a junior, he played mostly outside linebacker and racked up 97 tackles, 10 tackles for loss and seven sacks for Allendale-Fairfax.

Geohaghan is the sixth commitment for Clemson's 2012 recruiting class.