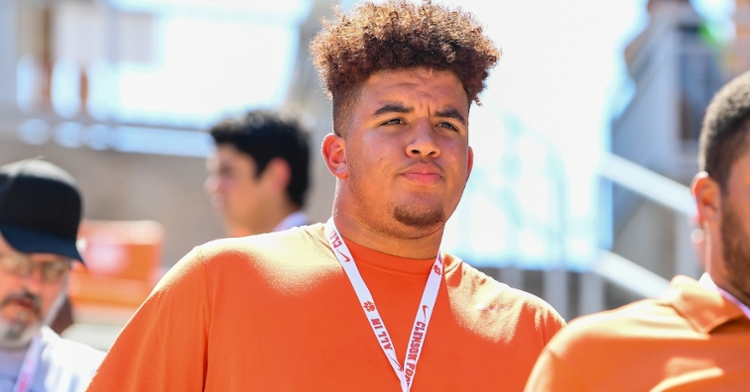 Tate is shown here on a visit to Clemson

Clemson is where elite 4-star offensive lineman Marcus Tate is meant to be.

The Clemson coaching staff picked up its second offensive line commit for the 2021 recruiting cycle in two days Tuesday when Tate, out of Ft. Lauderdale (FL) University High, gave his verbal pledge to Clemson via Twitter.

Clemson offered in June when Tate and his family visited the Clemson campus for head coach Dabo Swinney’s high school camp, and it was on that visit that Tate knew Clemson was his landing spot.

“My decision started sometime in early June or late May when I visited the first time. After I left, I started thinking about putting schools in there,” Tate told TigerNet. “At that time, they became one of my top schools because they talked about family, life after football, life period, internships. They hardly talked any football with me, so that was good for me. That put them at number one after I left that visit.”

Tate was back in Clemson for a visit for the Texas A&M game a few weeks ago.

“Three months later, I went to the A&M game and when I got there I was able to talk with Coach (Robbie) Caldwell, Coach (Brent) Venables and everybody,” Tate said. “There was a moment when I was on the field just looking up at the stands and we got to see them on Tiger Walk. When I was at Tiger Walk, I knew that is where I wanted to be. I knew Clemson was the place for me and it just made sense. I knew I wanted to be there after the first visit, but the second time I went there, I was just like, 'I'm a Clemson Tiger. That's where Marcus is meant to be.’”

Tate called the Clemson coaches last week to let them know his decision.

Swinney gave Tate the “are you sure” talk as soon as Tate made the call.

“He gave it to me. That was also a big thing for me because I knew I was ready to stop visiting other schools, stop talking to other schools,” Tate said. “The only school I want to go to, talk to or visit is Clemson. He gave me the talk and I told him Clemson is where I want to be.”

“It's great. As soon as I committed, Ryan was on my phone instantly,” Tate said. “Walker Parks was already at my phone. I got that from Clemson. It was a family atmosphere for sure. That's one thing I'm big on is family. I'm always there for my family so I was big on that. I could definitely see the brotherhood that's going to come as time passes by with this class. The big thing for me was my momma. When I was there, I saw a look on her face that not any other school put on her. That made me happier.

What is Clemson getting in Tate?

Tate is rated as high as a top-79 prospect overall and the No. 14 offensive tackle in the nation.

“You know nothing can stop me but loss of breath and I’m still breathing so it’s still on.” – Tupac Shakur #ALLIN Blessed By God???? pic.twitter.com/1ilHE3gJmu

Great Day to be a CLEMSON Tiger?? #WE2DEEP21 #ALLIN