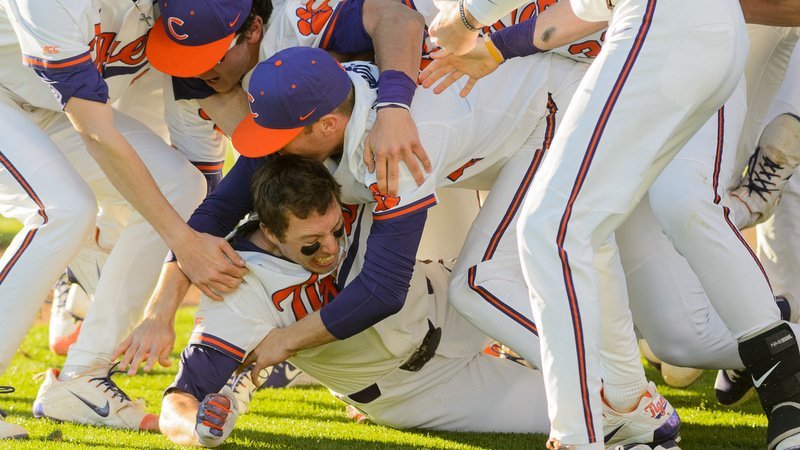 CLEMSON – Drew Wharton, have yourself a celebratory dinner tonight and make sure you eat four of everything.

Wharton’s one-out double off the wall in right in the bottom of the ninth scored Robert Jolly from first as No. 14 Clemson defeated South Carolina 8-7 Sunday afternoon at Doug Kingsmore Stadium. The win gives Clemson the season series over the Gamecocks for the fourth year in a row, the first time that has happened since the 1986-89 era.

The Gamecocks battled back from a 6-0 deficit and tied the game at 7-7 in the top of the ninth, but Jolly walked with one out and Wharton’s blast enabled to Jolly to slide in ahead of the throw to the plate.

"They kept chipping away and chipping away and tied the ballgame off of Ryley. What a heck of an effort by the South Carolina Gamecocks to tie the game up after being down 6-0. That says a lot about Mark Kingston and the job that he does of getting his guys to compete every pitch," Lee said. "But how about our guys? We just seem to find a way and I think we are now 11 games and we've had six one-run games and we're 5-1 in those games. Our guys compete pretty hard as well. I thought our guys did a good job when it comes to their offensive approach. I think the swings we took in the first inning set the tone for our offense."

Wharton said his last at-bat is a blur.

"Well, honestly, I don't remember much from the at-bat. He started me off with slider, slider, slider, slider," Wharton said. "I knew he had a good fastball so I just stuck with my two-strike approach and I was ready for it when he threw it. It was kind of up and out and I put a good swing on it. I was just praying had the wheels to get home and he did. It was awesome."

Cromwell opened the scoring in the first, launching the first pitch he saw into the left field bleachers for a solo homer, his second long ball of the season. The score stayed 1-0 until the third.

"I thought that was a lineout to left when I hit it and then I heard the crowd get loud and I looked up and it squeaked out," Cromwell said. "I just saw a fastball. I didn't think I put a good swing on it when I swung. When I saw video of it, it wasn't too bad. I just saw a fastball, put a swing on it and got lucky it went out. I was a little pumped up and excited to get the boys going in the first."

Davidson walked to lead off the inning and moved to second on a wild pitch. Seth Beer struck out swinging for the first out, but Cromwell dumped a soft single down the left field line that moved Davidson to third. Chris Williams singled through the left side, bringing Davidson to the plate for a 2-0 lead. Both runners moved up a base on another wild pitch and Williams scored on Robert Jolly’s bouncer to third for a 3-0 lead.

Clemson added three more in the fourth. With one out, Justin Hawkins doubled off the wall in left. One batter and an out later, Davidson doubled down the left field line, scoring Hawkins for the 4-0 lead. The Gamecocks intentionally walked Beer to pitch to the hot-hitting Cromwell. Both runners moved up a base on yet another wild pitch Cromwell was able to guide a 2-2 pitch into right field, plating both for a 6-0 lead.

The Gamecocks finally got on the board in the fifth. Clemson starter Jake Higginbotham gave up two singles to start the inning and T.J. Hopkins pelted a long, three-run homer to left that made it 6-3. Higginbotham’s day was done after five innings and 71 pitches. He gave up six hits, three runs (all earned), struck out three and walked two.

He was replaced by Spencer Strider to start the sixth and the freshman ran into immediate trouble. A single, a double and a RBI groundout made it 6-4. With a runner at third and one out, Strider struck out Justin Row for a big second out, but walked Noah Campbell to put runners at the corners. However, he struck out Hopkins to end the threat.

Davidson gave the Tigers some breathing room in the bottom of the sixth. Davidson smacked a 1-0 pitch into the seats in right for his first homer of the season and a 7-4 Clemson lead. It was estimated at 401 feet.

The Gamecocks added a run of two Clemson pitchers in the eighth, and with Clemson leading 7-5 and just one out in the inning Lee turned to closer Ryley Gilliam. Gilliam induced Matt Williams into an inning-ending double play.

Campbell reached on an error to start the ninth, but Gilliam struck out Hopkins for the first out. However, Stokes walked to put the tying run at first and bringing the winning run to the plate in LT Tolbert. Tolbert smacked a double off the left field wall, scoring Campbell to make it 7-6. Chris Cullen followed with a fly to center that scored Stokes with the tying run. The throw to the plate eluded catcher Kyle Wilkie, moving Tolbert to third with the winning run. Gilliam got Jacob Olson to pop out to center to end the inning.

The Tigers have a pair of midweek games this week, hosting Wofford at Doug Kingsmore Stadium Tuesday and playing Michigan St. at Greenville’s Fluor Field Wednesday. The Tigers start ACC action with a three-game series this weekend, hosting Georgia Tech.