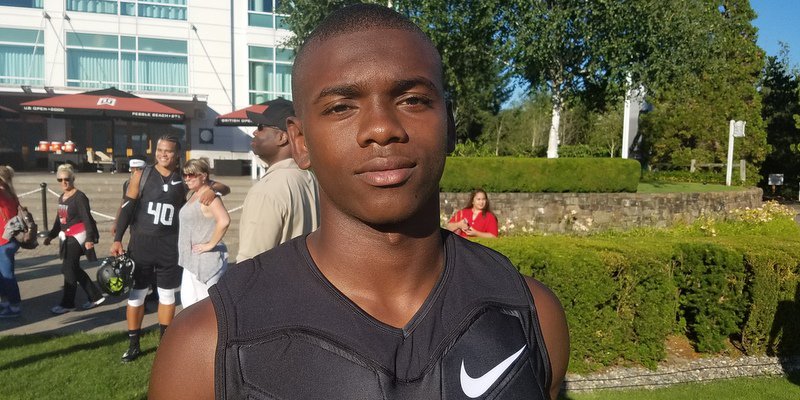 Cook at The Opening last week in Oregon

BEAVERTON, OR – It took just one play for Anthony Cook to show why he’s considered by many to be the nation’s top cornerback for the 2018 recruiting cycle, and why top schools like Clemson, Ohio St., LSU and Texas are battling for his services.

Cook, a 5-star out of Houston (TX) Lamar, is ranked at No. 36 in the ESPN300, is rated as the best prospect in the state of Texas by both 247 and Rivals and is considered to be the nation’s top corner by other services. He’s good, and he doesn’t back down from a challenge.

During Nike’s The Opening last week in Beaverton, Oregon, Cook matched up with Amon-Ra St. Brown, rated as a top three wide receiver nationally. After getting tangled up on a route, St. Brown took Cook to the ground, loudly complaining that Cook had held him on the route. A few seconds later, Cook’s shirt was ripped off and the players had to be pulled apart as the jawing increased.

Cook told TigerNet after the session that he doesn’t back down from any challenge.

“It’s important that these guys know I won’t back down,” he said. “They can say what they want, but no one here is going to intimidate me or make me feel any kind of way. I’m here to be the best.”

That feeling of being on an island, and being successful at it, is what separates the good corners from the great ones.

“I love to be on that island. I like to go man-on-man,” Cook said. “It's what I prefer because I like to be aggressive and show everybody that I'm here. It helps if you can get in the head of a receiver. I know Coach (Brent) Venables and Coach (Mike) Reed like to play that way. Coach Venables told me he likes the way I play, and if I came there I could make an immediate impact. He told me he needs some Texas boys.”

Cook told TigerNet that he hopes to trim his list of favorites down to three in the near future, and that a few schools are standing out.

“Texas is coming at me really hard,” he said. “Ohio State is coming extremely hard, so is LSU and so is Clemson. All the top schools are talking to me every day, telling me how much they want me.”

What has kept Clemson in the mix?

Cook will take another step in the recruiting process when he attends the All In Cookout next Friday, choosing to be in Clemson rather than at Ohio St.’s Friday Night Lights.