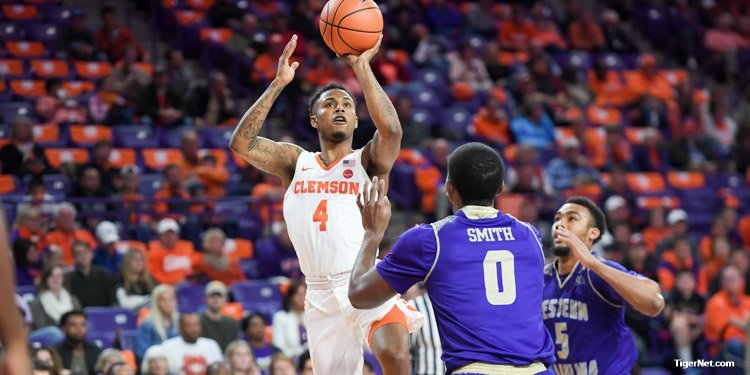 Shelton Mitchell goes up for a shot in the first half

The Tigers used a 22-2 run to close out the first half and started the second half with a 13-4 run en route to an 85-57 drubbing of Western Carolina at Littlejohn Coliseum. Clemson improves to 1-0 on the season while Western Carolina starts out 0-1.

The Tigers were a 20-point favorite according to Vegas.

The game was the first meeting between both programs since the season opener in 2010-11. Clemson owns a perfect 12-0 record against Western Carolina, including a 10-0 mark in games played in Littlejohn Coliseum, in a series that dates back to the 1978-79 season.

"Good start for our team. Really happy for our players. I think you could see the excitement we had all the way through the roster," head coach Brad Brownell said. "It's really kind of the way you want the opening game to go. We had to work a little in the first ten minutes and make a few plays, but I thought in the mid part of the first half we did some good things. We defended the three, attacked the basket and got to the free throw line."

Clemson led 22-20 with just over seven minutes to play when the Catamounts went cold. A 3-pointer by Gabe DeVoe with 6:59 to play ignited a 19-0 run over the next five and a half minutes. The Catamounts missed nine straight shots during Clemson’s run.

A wide-open 3-pointer by DeVoe made it 41-20 with 1:35 to play in the half, but a layup by the Catamounts’ Marc Gosselin ended the streak and make it 41-22 with 1:14 to play in the half. Twenty seconds later, Grantham buried a 3-pointer from the corner that made it 44-22. That was the score at intermission as Clemson finished the half on a 22-2 run that went covered 6:59. Western Carolina made just one of its last 11 shots.

The second half featured Clemson steadily pulling away as Brownell played most of his bench. The Tigers started the half on a 13-4 run, getting a layup by Reed with 15:59 to play that put them ahead 57-28. A.J. Oliver hit two free throws with just over 11 minutes remaining to go up by 31 at 66-35.

Aamir Simms brought the crowd to its feet with a thunderous dunk that put Clemson ahead 80-46 with just over four minutes left to play. The last few minutes featured a bevy of reserves, and the Tigers held on for the win.

"It's always really good when you get to play a lot of kids and they play well and make a basket or two," Brownell said. "It settles a freshman in, you hope, and now we can move on and start to get a little bit better. We have to improve our turnovers, but beyond that, I thought our defense was pretty good and it was just a good start."

The Tigers have a quick turnaround, hosting N.C. A&T Sunday at 2 p.m.

“We were thinking let’s play two games when we’ve got a lot of fans in town – help with the crowd,” Brownell said. “We won tonight, but now we’ve got to get them back and focused tomorrow, and we’re playing Florida State (in football) and there’s going to be 100,000 people in town having a good time and you’re telling (your players) not to.”

Clemson faces Ohio Thursday in the first round of the Gildan Charleston Classic in Charleston.

Clemson vs. Western Carolina box
Comment on this story