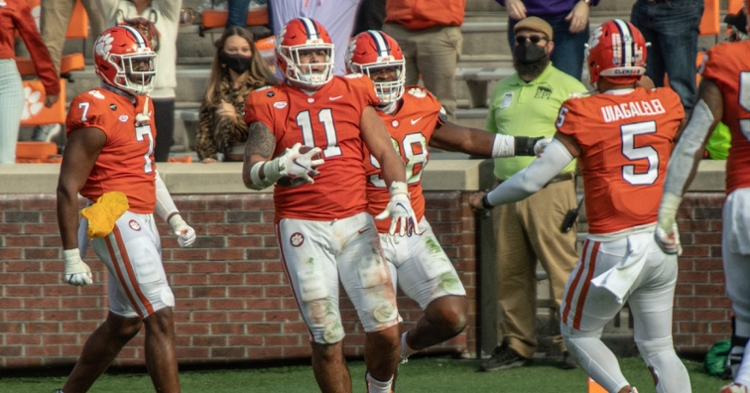 Bresee showed what a force he can be at times over the season (ACC photos).

The year 2020 was a roller-coaster ride for the college football season and Clemson's campaign was marked with a No. 1 preseason ranking, another dominant run through the ACC, a sixth-straight Playoff appearance and a bitter end in New Orleans.

We continue our look at the Tigers’ season position-by-position with the defensive tackles:

David Hood: Defensive tackle was supposed to be a strength heading into the 2020 season and it was. The Tigers had depth and talent, and despite the absence of Tyler Davis for an extended stretch, played well.

Freshman Bryan Bresee was a big part of that success, taking the field early against Wake Forest in the opener and earning a starting spot. Bresee was named the ACC Defensive Rookie of the Year for his efforts, and he held the proverbial fort while Davis recovered from an ankle injury. Davis missed two games early in the season (Virginia and The Citadel) and the missed three more (Syracuse, Boston College, Notre Dame). It’s interesting to note that Davis had just 13 total tackles, but when he was in the lineup, he was a force.

The Tigers had veterans like Nyles Pinckney and Jordan Williams (who have both now transferred out) for depth, and got snaps for youngsters like Ruke Orhorhoro and Rueben Etinosa. Except for Pinckney and Williams, everybody at that spot returns next season, including freshmen DeMonte Capehart and Tré Williams.

Brandon Rink: Davis was missed in the first game at Notre Dame, where the Irish ran up 208 yards on 40 carries, and then he certainly played a role containing the Irish to 44 yards on 30 carries in the ACC Championship. That said, by injury or just more tape on him now, he did take a step back grading-wise -- dropping on Pro Football Focus from a 79.6 overall mark and 78.9-grade against the run as a freshman to 68.3 overall and 64.1 against the run last season. PFF credited him with eight sacks and 19 hurries in 549 freshman snaps, compared to two sacks and four hurries in 196 plays as a sophomore.

With Davis missing time, Bresee had to step into a big role early and did pretty well with it overall and definitely for a freshman. Departing redshirt junior Jordan Williams is an interesting case because he has the best grade among regular contributors (75.5) and not much to speak for on the statsheet (11 tackles/1 TFL/3 QB pressures). Tré Williams spent the majority of the season on the unavailable list but his mark in backup duty against Georgia Tech set the standard for the group grading-wise (93.8; three stops in 10 run defense snaps).

The best offense Clemson faced this season, Ohio State, running at-will is still fresh in my mind and should be some fuel for the interior D-line to win more matchups at the line of scrimmage in 2021. The individual talent is there to improve, and Bresee and Davis continuing to take steps forward at the top of the depth chart will be key.