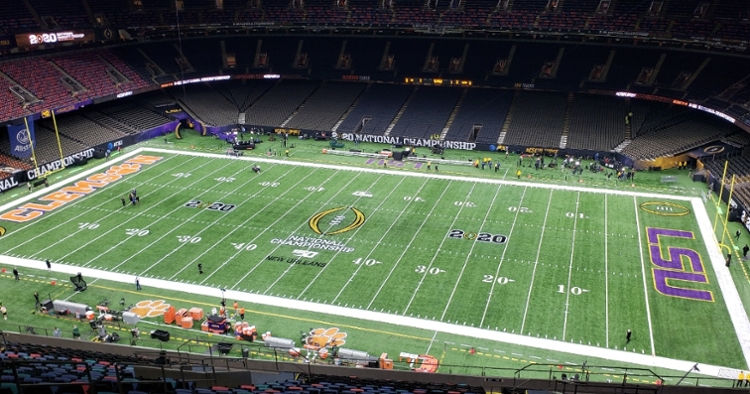 Clemson and LSU kick it off in just a few hours

NEW ORLEANS, LA – It’s time to kick this thing off.

We’ve arrived at the Superdome for tonight’s matchup between Clemson and LSU. Yes, security is tight (I had to deal with the Secret Service coming in) because President Donald Trump is scheduled to attend the game.

The media boarded the buses at the media hotel and received a police escort to the game and when the buses would roll by, led by the motorcycle police with sirens blaring, the fans on the streets would raise their phones to take photos and videos of the spectacle. When they realized we weren’t one of the two teams and just the media, you could see the disappointment on their faces. Everybody is ready to get this thing going – 16 days is too much.

Speaking of the bus ride – it’s always fun to hear how other media outlets perceive the Clemson program. I heard two of them talking, and one said that while he thinks LSU has great coaches, he also thinks the Clemson coaches are better and used the 16 days to better advantage. LSU also had a cakewalk over an overmatched Oklahoma team, while Clemson is coming off a bloodbath against Ohio St. Clemson NEEDED those 16 days to heal.

We’ve seen wide receivers Justyn Ross and Tee Higgins multiple times over the last few days and both of those guys seem ready to go. The only other injury we are tracking is defensive tackle Nyles Pinckney (ankle), who has been extremely limited in practice. The guess here is that either he won’t go or will be able to play just a few snaps. This one is on Xavier Kelly, Tyler Davis, and Jordan Williams.

In reaching out to various people within the program (and from what I’ve seen with my own eyes lately, this team is ready and focused. I did a national radio show this morning and one of the hosts suggested that perhaps LSU is the hungry team this time around – they haven’t been on this stage in a while and Clemson seems to be a yearly participant.

They couldn’t be more wrong. There is always turnover in a college program, and so many of this year’s players look at last year’s team and they know it belonged to Christian Wilkins, Dexter Lawrence, Clelin Ferrell, Austin Bryant, and Hunter Renfrow. There are guys like Isaiah Simmons, James Skalski, K’von Wallace and others who want to leave their own stamp on the program. The Clemson hunger is definitely there -watch any interview with Wallace or Skalski and you’ll see it.

Someone asked for a word to describe how the team feels heading into this matchup and I told them I had to use two words – grim resolve. It’s amazing that a team with a 29-game winning streak and all of this success is the team that isn’t really talked about and is the overwhelming underdog, but that’s the case. I spoke with the parent of a player and he said pretty much what I’ve been thinking – he’s been to the practices and says there is a quiet confidence that is permeating the program right now.

All that can be said has been said. Now we play the game. Will the grim resolve win out? Let’s kick it off and find out.