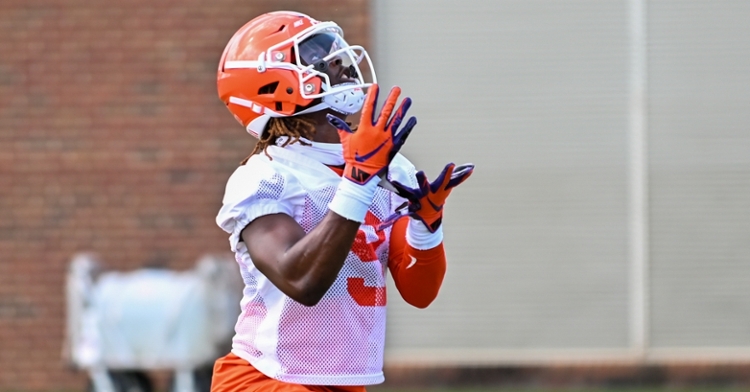 CLEMSON – We are just two practices into a fall season, but there is already a sense of just how talented this Clemson team is and can be.

I wish we could see the practices in person – I like to roam around the practice field and pick out individual position groups and players and watched extended reps – but if staying away keeps everyone safe and sound and means we have a season then I am perfectly content to stay at home and watch from afar.

One sort of interesting note – when practices are normal, there are always visitors. And when there are visitors, there are extended conversations after practice and that means a lot of standing around and waiting for the media. For instance, we might get an email that says practice ends at 6:15 and to be there for interviews. We all start to show up about 6:05 and then we wait. And wait. And wait. I’ve waited in the cold, torrential downpours when my umbrella broke, and extreme heat.

If practice was scheduled to end at 6:15, it usually doesn’t end til 6:45 and then we wait on all of those conversations with visitors and it might be 7:30 or later before interviews usually start. Another media member and I started keeping track last year and just during fall camp, we spent an entire day waiting on interviews to start. That’s right, over 15 practices or so we waited hours. I am not complaining because it’s part of the job, and I actually like just getting out of the house and talking to someone else.

But with no visitors, our video interviews are starting right on time.

*Travis Etienne at punt return? We got a short glimpse of the Tigers’ star running back at punt return, but I don’t expect to see that this season unless things get bad. Amari Rodgers is one of our first picks to get the most reps there, but Demarkcus Bowman is another intriguing possibility.

For the record, Etienne has never returned a punt during his Clemson career, but it would be fun to see. He did have 19 kick returns his freshman season (for a 20.7 yard average), and had five returns last season (for a 25.60 average). Just once I would love to see him at punt return, just to see what he could do.

*We did get an extended glimpse of the linebackers. Vonta Bentley is one to watch this season. He has flown under the radar a little bit, but people might forget he is a former 4-star that everybody wanted. He’s been behind some really good linebackers at Clemson and our reports during the spring and what we’ve heard so far indicate he is one to watch.

I saw freshman linebacker Kevin Swint at several camps over the last few years and have always loved the athleticism he brings. Swint checked in for spring practice at 245 pounds but weighed in at 224 this week. He looks even more explosive and is just one of those guys I think has superstar written all over him. Trenton Simpson is another one that sometimes gives you that athletic “wow” factor.

We will write more about James Skalski later, but there is no doubt that he's the leader of the defense. He has been around a long time now - he's on the Hunter Renfrow plan - and ACC teams will be sick of seeing him by the time he leaves.

*One of the clips showed quarterback Trevor Lawrence going over the top to tight end Braden Galloway. With no Justyn Ross or Diondre Overton or Tee Higgins this season, I could see Galloway spending a lot of time either out wide or in the slot as the coaches look for a mismatch with the defense. Galloway told us he was spending some time at wide receiver during the spring, spending time at the 5-man spot usually manned by Amari Rodgers.

Galloway also said then that he knows he has things to work on.

“I am very confident in my speed and my abilities and I trust in the coaches and their playmaking decisions to put everybody in the right positions to make plays,” Galloway said. "I want to be more physical at the point of attack, that is maybe the biggest thing. Working on hand placement. Footwork is really big. I am moving around a lot of different positions. I am in the backfield and I am being split out and I am working on my motions and being faster with that. There is something to work on every day. You only get 15 practices in the spring, so you have to use time outside of football to get better at things.”

If we have a season, think it's safe to say Braden Galloway will be a big-time weapon for @ClemsonFB -- exceptional catch on this throw from Trevor.