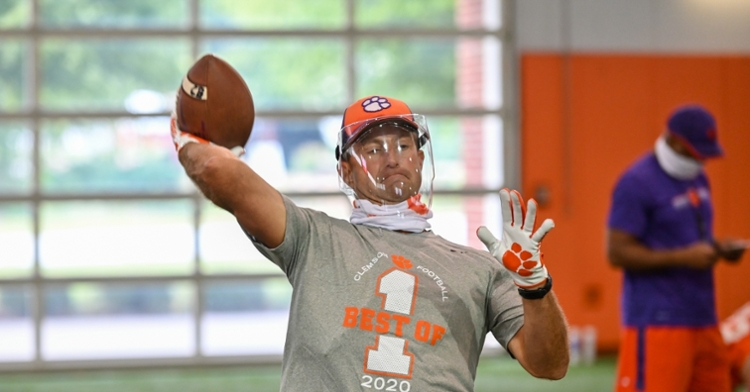 Swinney throws with a face shield before the start of practice. (Photo courtesy of CU Athletics)

Things are indeed a little different for everyone as fall camp started in Clemson this week, but some things never change.

Camp started unofficially Wednesday with the big weigh-in and started officially with the first practice Thursday afternoon. The media isn’t allowed inside the Clemson bubble (and we are OK with that, as long as we have a season) but the school is releasing B-roll and photos and there are certain things we can glean from what we’ve seen.

The first thing I was looking for and noticed? Practice started with The Boys Are Back In Town by Thin Lizzy. Whenever the team reconvenes for practice – during the fall, spring practice and bowl practice – that is the first song played. It’s a tradition and it makes me feel like football is finally here.

*Many teams are wearing face shields during practice, but Clemson players are coaches are opting for face coverings. Head coach Dabo Swinney wore a face shield Friday that gave him a different look, but that might have been just for the early part of practice when he gathers the team around and talks. One has to wonder if they give him a mic or if he has to scream past the plastic.

The ACC medical advisory board doesn’t mandate the face shields for the players, and LSU’s players complained early last week that they were like trying to practice inside a plastic Ziploc bag. The helmets are already confining, and then trying to run with your mouth and nose completely covered in the heat? Yikes.

When it comes to the face coverings, it’s interesting to note that everyone wears them a little different. Defensive coordinator Brent Venables wears his completely over his nose with just his eyes peeking out. He looks like a Wild West bank robber, which is fitting, because he’s taken the money out of the pockets of a lot of offensive coordinators over the years.

*Clemson’s quarterbacks are……how do I put this……physically imposing. Trevor Lawrence looks like he should be on an NFL practice field somewhere. Taisun Phommachanh has sculpted his body and looks more comfortable every time we see him. He looked poised in the spring and looks even better now.

And then there’s freshman DJ Uiagalelei. Goodness. He looks like an NFL linebacker out there. We all know he can spin it, but it will be fun to see him play when he finally gets into a game this season. The first time he runs the football will be something to watch.

One word comes to mind when watching Travis Etienne. Unreal. Yes, I love watching Lawrence sling it all over the field, and I love the gutsy fire that linebacker James Skalski plays with, and there are other players that are so much fun to watch. But Etienne is simply a pleasure. I keep writing that he is one of the all-time greats (imagine if he got half the carries of a Wisconsin back), and I hope the national media begins to take note.

No music needed—just the sweet sounds of Fall Camp!