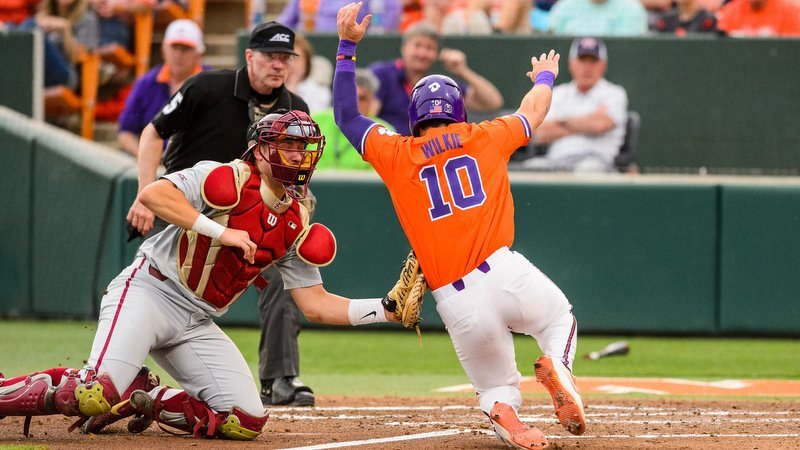 Both teams failed to scratch a run through five innings and the Tigers didn’t put a runner in scoring position until the bottom of the fifth. Kyle Wilkie led off that inning with a double into the left-field corner, moved to third with one out but was thrown out at home on Drew Wharton’s fly to right field.

Florida St. finally reached Clemson starter Jacob Hennessy for a run in the sixth. Rhett Aplin doubled down the right-field line to start the frame and scored on Cal Raleigh’s single to right for a 1-0 lead. After a fly out to center, Hennessy was replaced by Ryan Miller, who escaped the inning without further damage.

Hennessy went 5 1/3 innings, giving up the one run on seven hits. He stuck out three and walked none.

Reese Albert homered to right-center to lead off the seventh and the Noles held a 2-0 lead.

The Tigers chased Parrish and scored a run in the seventh without benefit of a hit. Chris Williams, Kyle Wilkie and Patrick Cromwell each drew one-out walks and Parrish was done for the night. Wharton hit a fly to deep center that scored Williams to make the score 2-1.

A wild pitch advanced both runners and Byrd walked to once again load the bases, but pinch-hitter Robert Jolly struck out end the threat.

Parrish went 6 1/3, giving up just the one run on two hits. He walked three and struck out eight but didn’t figure in the decision.

Greene doubled off the wall in right to lead off the eighth and came around to score on Davidson’s sharp single to center, tying the score at 2-2. That brought up the heart of the Tigers’ order, but Beer struck out and Williams bounced into an inning-ending double play and it was 2-2 heading to the ninth.

Miller gave up a one-out single in the ninth, and after getting the second out was replaced by Ryley Gilliam with a runner at second. Gilliam got a strikeout for the final out. Miller pitched 3 1/3 effective innings, giving up just one run on five hits.

The Tigers had a chance to score in the bottom of the ninth, putting runners at first and second with two out, but Jolly flew out to left and the game went to extra innings.

Gilliam gave up a single and a walk to start the tenth, then tossed a two-out walk that loaded the bases. The pinch-hitter lined out softly to short to end the threat.

FSU at Clemson Game one box score
Comment on this story