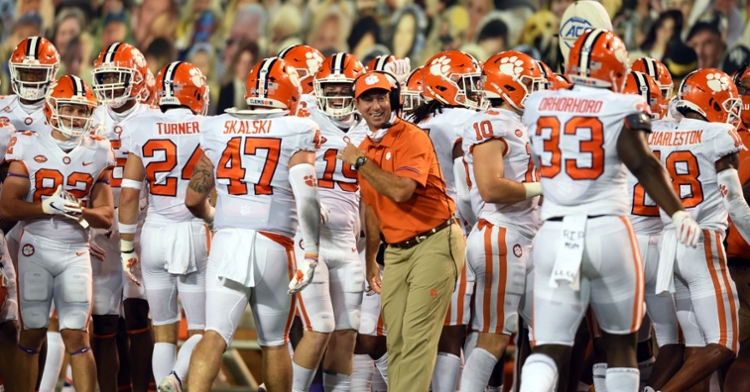 Head coach Dabo Swinney encourages his players during the win over Wake.

The 2020 football season is far from normal and everyone has to do things a little different, and that includes how the Clemson football team travels on the road. That includes the coaches and staff serving the players their meals at the team hotel, and traveling with face shields and masks.

It’s all different, but head coach Dabo Swinney has told his team to embrace the suck, even though they got off to an almost-normal start to the road trip.

“First of all, if you come in on Friday, and we have our routine, but now you come in on Friday and you have to have a virus test,” Swinney said. “We had to do that. But we tried to keep our Friday the same as far as going into team and segment meetings, and then going into the stadium. We always have a 30-minute game prep walk-thru, and then lunch, and then we are ready to go. So all of that was normal. But we had to wear masks and shields on the bus and the plane, so we had to double up on the bus and the plane. So that was a little bit of a challenge.

The plane trip? Trip to the hotel? All different.

“We couldn't have food on the plane, no snacks. We have always handled our own luggage,” Swinney said. “Players get off the bus at the airport and get on the plane, and the coaches and staff, we get the luggage off the plane and load it on the buses. That is something we have always taken pride in, so that wasn't that big of a deal. Going to the hotel in North Carolina, they are in a different place right now and had limited staff. This was their first big event at the hotel since March.”

Swinney said the team had to make adjustments at the team hotel in Winston-Salem.

“We pretty much had the whole hotel. We usually have multiple meeting rooms, and we could only have one meeting room,” Swinney said. “So, we had to have one big space and just put up a big air wall when we needed a separate space for offense and defense. That is where we ate and where we met. We did a movie there. We had to break the room down and set it back up, clear it all out for the movie. We got them all these little blowup beanbag-type things that you relax in to watch the movie. We had a great time with that and then reset it. From a food standpoint, they usually serve themselves and get what they want.

“They weren't allowed to serve themselves so we had to do it. And it was great. We were washing people's feet and serving mashed potatoes. It's all kind of the same thing. I thought it was great and I thought our staff was amazing. The good thing is we didn't have to ask anybody to do anything. Everybody took the initiative to just go to work and find something to do. It was not our normal but it was what we had to. It was every meal. Our meal and ice cream and drink station. A few differences but we made it work.”