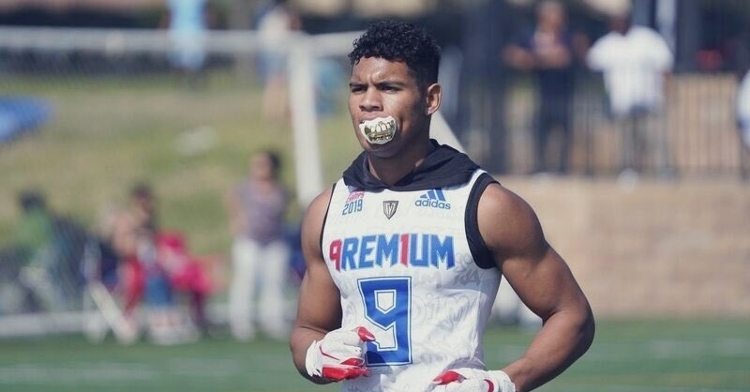 Clemson’s recent trips to California included returning home with a national championship trophy and elite recruits. With that recent success recruiting on the West Coast, one of the top prospects in the nation has taken notice of the Clemson program.

CJ Williams is a 6-2, 193-pound wide receiver from Mater Dei (CA) Santa Ana, currently regarded as a 4-star prospect by 247Sports. Williams is the No. 33 player overall and the No. 5 wide receiver in the nation, currently holding offers from over 40 schools including Alabama, Ohio State, Notre Dame, and Michigan. Williams has been talking to wide receivers coach Tyler Grisham, and a virtual tour of the Clemson facilities gave Williams a strong impression of what Clemson has built.

Williams’ virtual visit opened his eyes to what Clemson has to offer, and Williams puts Clemson at the top of the list of schools he has seen.

“I’ve had a virtual visit and I fell in love with it just off of that visit,” Williams told TigerNet. “They’re top-notch. I’ve taken a visit to Oregon and they say top-notch facilities over there, so I would be able to compare them to Clemson. Best of the best for sure as far as football and their facilities.”

Williams’ conversations with Grisham have gone beyond just football, and Grisham has been impressed with the maturity level of the elite wide receiver.

“Coach Grisham loves me as a player and he’s made that clear. What he really emphasizes with me is he loves me more than just a player, he loves me as an individual. He knows my head is in the right place as far as family and the current situations in the U.S. and around the world. He’s come to the realization that I’m mature beyond my years and that’s something he values. I like that it’s more than football with him and he really takes his time recruiting me.”

Williams has been hearing from all of the major college programs across the country. What does he bring to the field to make him a highly regarded recruit?

“I like to say I’m an all-around football player at the end of the day,” he said. “There’s always something to improve on in my game, and I feel like the areas I’ve improved on is getting out of my breaks. As far as the places I feel like I’m elite, I catch the ball strong and look the ball all the way in to the tuck. I have a big catch radius with long arms and a big reach. If the quarterback puts the ball anywhere in my area, I’m going to make that play. Something that I pride myself on is watching film prior to the match-up I have. I watch the cornerback and kind of see what his strengths and weaknesses are so that I can read defenses when I get on the field.”

Much of the ’22 class recruitment has been handled by virtual visits, and Williams has taken a few up to this point. Williams is hoping to check out Clemson in-person once recruiting resumes, as well as other schools who have already offered the polished receiver.

“Most definitely, I think that’s something that my parents and I will definitely want to do,” Williams said of a Clemson visit. “They’re very fond of coach Grisham. My dad went to the University of Alabama and I was born in Tuscaloosa, so we have that connection with coach Grisham and coach (Dabo) Swinney. I had visits set to Michigan, Ohio State, and Notre Dame before Covid shut things down. I had Texas, Texas A&M, Washington, Stanford, and Cal on my list, and I can get to USC and UCLA at any time, so I’ll probably pick back up and add on as offers continue to come in for me. I feel like the distance as far as college isn’t a variable for me. In life, you’re going to have to get used to it and that’s something I think I can get used to pretty quick. Obviously, I’ll miss my family. But as long as I can get on the phone with my mom and tell her I love her, I think I’ll be fine.”

Williams has been recruited hard by schools like Ohio State, Notre Dame, Minnesota, USC, and many others. What are the big factors that Williams is looking for in that perfect school?

“My parents and I pride ourselves on education, so wherever I can go and get a great business degree that will set me up for 40 years in the future,” Williams said. “It’s not a 4 year decision, it’s a 40 year decision. My parents love Stanford for that reason alone. Personally, I want to see the family aspect. I want to get a good connection with the wide receiver coach, the offensive coordinator, and whoever the incoming quarterback is in that class. From the entire staff, I want my parents to feel like I’m in good hands after they hand that torch over to me. Just to have a coach that I can invite to my wedding in the future and that family feel and somewhere I feel comfortable.”

Williams will bring a high IQ and elite-level receiving threat to a school, but what else can a school expect from Williams’ time in college?

“I would sum it up in one word, competitor,” Williams said. “They’re going to get a competitor and a great kid who is going to do all the right things. I’m going to give them my best and I hope they give me their best. I’m going to compete on the field and they’re not going to hear a peep from me as far as conflict and stuff like that. I’m just going to do my thing and word hard. And hopefully God will bless me with the opportunity to get on the field early and make some plays.”

Williams finished up his sophomore season at Mater Dei with 50 catches for 684 yards and four touchdowns. Williams was named to the MaxPreps 2020 Preseason Junior High School All-American team.