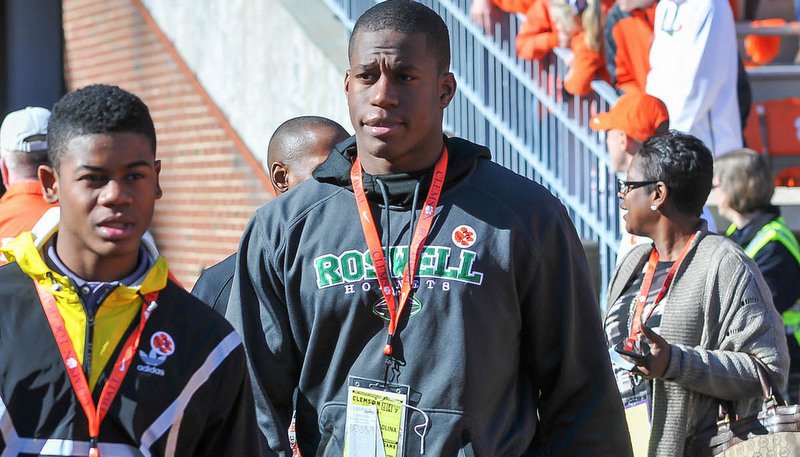 View Full Profile has been a frequent visitor to Clemson’s campus since August. However, his junior day visit last month was less about football and more about getting the lay of Clemson’s campus and a feel for the every day life of a student athlete.

The four-star Roswell (GA) linebacker has a top five of Alabama ,Clemson, Mississippi State, South Carolina and Tennessee, although he cites no particular order, and the junior day visit further cemented the Tigers’ place in that top five.

Despite not wavering from that top five, the 2016 prospect told TigerNet recently that he isn’t close to making a decision.

“They are in my top five of schools that I’ve seen so far,” Lamar told TigerNet. “In terms of making a decision, I haven’t really locked down a date for that so there isn’t really a timetable. I’ve got a couple of more visit setup this spring – one to Alabama and one to Duke.”

Lamar took in several games last season but there was still more that he said he wanted to see.

“I had never seen the training room before,” Lamar said. “This was more in-depth than the other junior day or visits that I’ve been on before, so I could get a better overall feel for the university.”

Not only is the 6-3, 250-pounder a standout linebacker, he also takes a lot of pride in his academics and said that he took the time to talk to co-offensive coordinator Tony Elliott

“I think the academic side is great because I want to go into civil engineering, so seeing the academic support in Vickery Hall and the tutors, I like that,” he said. “In terms of engineering, Coach [Tony] Elliott – my area recruiter – was actually an engineering major. I also got to talk to Mitch Hyatt

View Full Profile – midyear enrollee who is also an engineering major. I talked with those two a lot about it.”

Lamar also spent quite a bit of time with Clemson’s defense coordinator.

“I talked to Coach Venables the most,” he said. “We talked about how I fit into the Clemson defense and the day-to-day life of a student athlete at Clemson.”

Clemson’s first junior day was featured a who’s who list of the top prospects in the country, allowing Lamar a chance to catch up friends that he’s made on the recruiting circuits.

“I knew a couple of people from the Georgia Junior Bowl – the rising senior bowl – like E.J. Price,” he said. “I got to talk to those guys that I knew when we were walking around a little bit.”