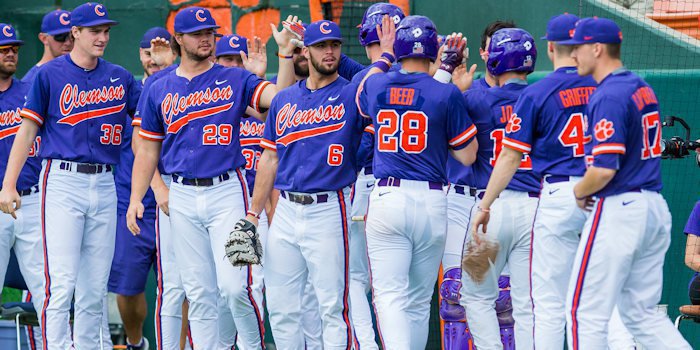 Clemson has another shot at win No. 40 Friday

LOUISVILLE, KY – Clemson head coach Monte Lee made headlines in mid-April when he told his team that they “eat pressure like candy.” The candy has been sour instead of sweet since that statement, and Lee admitted Wednesday that he's taken a little heat for it.

The Tigers were ranked fourth nationally and riding high when they overcame a 5-1 deficit late to defeat Charleston Southern. The come-from-behind, midweek game prefaced a big weekend series at FSU, starting a stretch of games against the ACC’s elite.

“As a coach, I don’t know if you could be more proud of the team. I don’t know what else I could say than that. What else could I ask for?” Lee said after that game. “We eat pressure like candy. We’re going to embrace pressure and enjoy those moments. It’s baseball. You’ve just got to compete.”

Lee then said that the best baseball teams don’t let the pressure get to them.

Clemson won the first game at FSU, but have lost 13 out of their last 23, a stretch that included a record nine-game losing streak in the conference. The Tigers entered the ACC Baseball Championship as the fifth overall seed, but lost to ninth-seeded Duke Tuesday, putting their hopes of hosting a regional in jeopardy.

Lee was asked about the candy statement Wednesday before the Tigers practiced at Louisville’s Jim Patterson Stadium, and he said people have taken that statement out of context.’’

“I have thought about that a lot. You asked me a question about what I told the team in the sixth inning in the dugout against Charleston Southern,” Lee said. “And all I was doing was trying, to be honest with you guys, as I always am. And give people who follow our program an inside look at what we value as a program. And in that moment, that is what I told our team.”

Lee said the statement was more of a snapshot of one game than trying to describe the mentality of his team.

“It wasn't an overall statement; it was a moment in time,” he said. “At that time, we were down 5-1, and before the inning, I brought the guys together and told them to relax because we've been in pressure situations before. That was where the comment came from. It didn't come from me making an overall statement that we eat pressure like candy. And I have been criticized about that since then, and that's ok. But I was only trying to give an honest answer to a question about what I told our team in that moment.”

Clemson returns to action at noon on Friday as they take on No. 4 seed Virginia at Louisville’s Patterson Stadium.