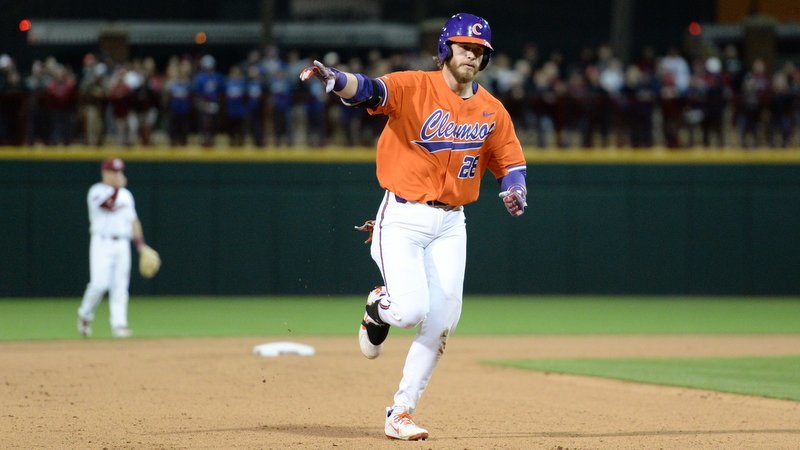 Beer is happy with his decision to become a Tiger

Monte Lee remembers it as one of the first phone calls he made after being named the baseball head coach at Clemson.

Seth Beer remembers it as the phone call that cemented his decision to join the Tigers’ program.

Both are true as the call from Lee to Beer was the start of a strong relationship that has helped form Lee’s program since he took over.

“When I got the job, I discussed all of that with Bradley, with Coach (Bradley) LeCroy first and foremost who I needed to stay in touch with, kind of where we were at with certain guys,” Lee said. “And he told me, ‘You’ve got to touch base with Seth. Seth’s probably the first guy you need to call.’ So I did. I called Seth and talked to Seth, had a really good conversation with Seth, more just to let him know who I was and what I believed in and how I felt like him coming to Clemson, how it was going to impact his life and impact our program.

“Really just kind of spoke from my heart, and then a few days later, he and his family came up, and we had a face-to-face and spent more time together. I think he felt a little bit better about the transition, and that’s a tough thing for any young man to have to deal with; transitions aren’t easy for anybody. I do remember that phone call, yes. I talked to Bradley, and he said, ‘Hey, we’ve got the best hitter in the country coming here, so you might want to call him and make sure that he’s still coming.’ I did that, but it was great to hit it off so well Seth early on in that process, and we've had a great relationship ever since.”

Beer certainly enjoyed what he heard from Lee during that phone call about the direction the Clemson program was headed with its new coach.

“I talked to him for a couple of hours, and I was like, ‘Coach, I don’t want to play anywhere else.’ I said, ‘I love this school. I love this program, and I want to play ball here at Clemson,’ ” Beer said. “Just talking when it came to how he wants his hitters to be because we want to be a team that has a lot of power, that hits the ball, not a small-ball team. In a lot of college programs, it’s very successful, but sometimes it doesn’t help guys get to the next level, and that’s what I was looking for, was a team that I could go to, and he could help me further my strengths when it comes to baseball.

“Hitting was a big part of it, and he loves talking hitting. So I talked to him for about two hours about all that kind of stuff, and I said, ‘Man, this is the guy I want to play for.’ ”

That relationship certainly has paid off for Lee, Beer and the Clemson program. Beer broke onto the scene as a freshman with a .369 batting average, 17 home runs and 70 RBI. As a sophomore, he batted with .298 with 16 home runs and 53 RBI as teams were more careful pitching to him.

This season, he is batting .316 with 20 home runs and 52 RBI and has helped lead Clemson to a regional host position for the third straight year.

The Tigers host Morehead State at 6 p.m. on Friday, while Vanderbilt faces St. John’s in the early game.

“My goals this year, honestly, were to get to 20 bombs,” Beer said. “That was something I didn’t voice really much to anybody. It was just kind of in the back of my head, so when I hit that 20th one, it was pretty cool, and that was something I looked forward to. But I think for me it’s just going out there and just trying to stay composed and stay confident and not try to do too much. That’s kind of what I looked to going into this year that I had to learn from my sophomore year.”

Beer will play this postseason with the Major League Baseball draft in the back of his head, and he has been projected as a first-round selection. The draft is set for June 4-6, but Beer said he is focused on the Tigers’ chances in the regional and then possibly a super regional.

“Just looking at it game by game; right now, I’m looking at this first game in our regional and just taking it step by step,” Beer said. “(It’s) incredibly hard. Playing ball as a professional is something I’ve looked forward to since I was 5 years old, so it’s extremely hard, but I need to stay focused, and I need to be there for my teammates and stuff and get as prepared and ready for tomorrow and the next day leading up to the regional as best I can.

“Like always, there’s those thoughts in the back of the head, but I’m trying my best to just keep it the same way every day like I have the last couple of years, just going out there and having fun and playing to the best of my ability.”

Beer’s ability has been showcased as part of one of the best lineups in the country. Chris Williams has 17 home runs and 66 RBI, while Logan Davidson has 15 home runs and 45 RBI forming a dangerous trio for the Tigers.

Those three will try to help the Tigers (45-14) advance out of the regional round, which they haven’t done the past two years despite hosting.

“When we’re all going good, and we’re all not going good, I really believe we can compete with anybody in the country,” Beer said. “Obviously, in this sport, it’s really hard to get everything going at once and everything going your way, so you have to look at it that way. At the end of the day, the only thing we can control is the confidence level going into the game, so for us one through nine, I have full confidence and full trust in every single one of those guys in our lineup. And I know even the guys on the bench, they’re itching to get in, and we’re going to do everything we can to help our team win.”