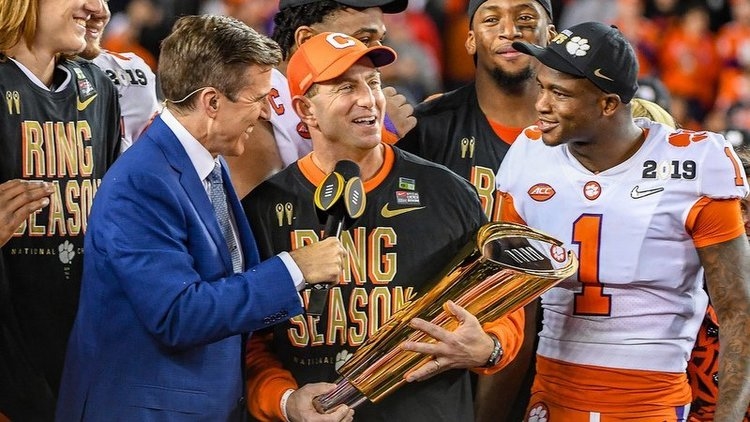 Clemson head coach Dabo Swinney says there’s no doubt that his 2018 National Champions are the best ever, and one ESPN college football analyst says Swinney has an argument.

Clemson finished the season with a 15-0 record after its shocking 44-16 win over Alabama in Monday's title game, the first team to post this mark since Penn in 1897. The Tigers outscored opponents 116-29 in three postseason games on their way to a championship, while only two games all year were decided by less than 20 points.

"The 2018 team is the best ever," Swinney said during the team’s championship celebration last weekend. "Drop the mic, the best ever. And they have set a standard for all future teams."

Comparing teams from different eras is tough and we will never know how Clemson would stack up against some of the greatest teams in the past. What we do know is that Clemson defeated an Alabama team that many in the media were already crowning the best ever.

“I never believed that. We get enamored by offense and Alabama's defense, while good - just because Clemson exploited its weaknesses, doesn't mean it wasn't a good defense,” ESPN’s Rece Davis said earlier this week. “It most certainly was, but it certainly was not on par. Statistically, you go back to Nick's (Saban) first year before he had a defense that was more comparable. I never believed that, to begin with. Maybe the best offense. I would say it was in the neighborhood. I still haven't seen a championship performance better than the one USC put on Oklahoma the year they won the championship, but it was at least in that neighborhood, but it was sensational.”

Davis said the Tigers made plays in the clutch.

“It was particularly noteworthy because they did what champions do; they make clutch plays,” he said. “You go back through the metrics and the success that Alabama had both offensively and defensively on first and second down was conducive to winning the game, but Clemson made every play on both sides of the ball brilliantly on third down, which was the money down and the championship down. That's how they won the game. I thought doing that, putting the game away and really frustrating a really good Alabama team and keeping that offense out of the endzone as they did time and time again after they moved within striking distance was just brilliant.

“It was certainly as good a championship performance as I've seen since USC beating Oklahoma. I don't put Texas beating USC there because both teams were brilliant and it was great and an awesome game at the end. Just in terms of one dominant championship performance, I would say the only one that I can think of off the top of my head that exceeded that against a really elite team was USC over Oklahoma game in the 2004 season.”

Where does he put this Clemson team in history?

“It's up there. They're 15-0, so if you just count numbers, they're the best of all time. I would take that USC team that I mentioned over them,” he said. “Maybe, I think 2009 and 2011 Alabama are with them. I don't know if they're better or not, but they're certainly right there with them. The Texas team that Mack had that won the championship is right there with them too. That's a pretty elite and ethereal realm that you're talking about. I haven't sat down and thought about are they top two, top three, top five. What are they? They are certainly right there with the greatest single-season team and being a great four year run for them as well.

“They have an argument. Just because I sit here and say that I would take the 2004 USC team over them doesn't make it right. They certainly have an argument for the best team in the modern era. They did something that no one else did not only in terms of winning 15 games but of winning the championship game over a great team decisively and doing so as an underdog and proving their point and dominating the game. I think they have an argument. If you want to say they're the greatest team of all time and put them up there with those great Miami teams, all of that would be a matter of taste or preference or what you value in a team but you cannot sit there and definitively say that 2004 USC or 2001 Miami or the 80s and 90s Hurricane teams or Nebraska teams - you can't sit there and definitively say that Clemson's not right there at the top. They have an argument against any team that you could conceivably go against.”