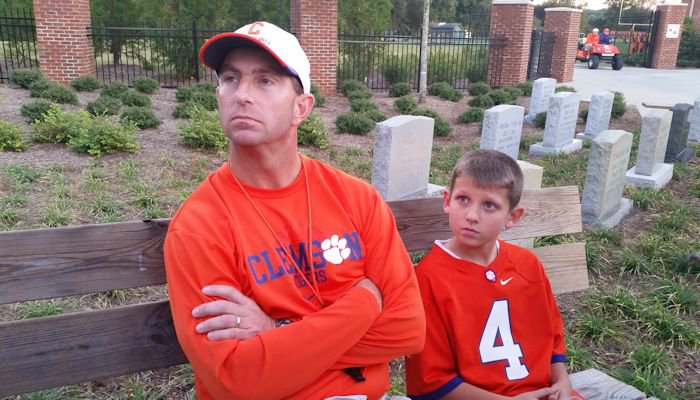 Swinney with his shadow for the day.

The freshman running back out of Elberton, Ga., has battled injuries since arriving on Clemson in the summer of 2013, but has recently been cleared to practice and Swinney said after Wednesday’s practice that he expects Dye to play Saturday.

How much will Dye play? Swinney said it will depend on the game.

“We’ll see how the game goes. He’s done everything he needs to do as far as practice and being really attentive to the details,” Swinney said. “He’s demonstrated that he has a good enough grasp that he could play. We’ll see where we are. I’m really pleased with how he’s done Monday, Tuesday and then today. Right now, he’s a go. Whether he plays no plays, one play or 50 plays, who knows. We’ll see how the game goes and if we get the right opportunity he’ll play.”

Swinney said that fans shouldn’t expect too much of Dye right off the bat.

“You guys have to understand that he’s not going to be perfect day one,” he said. “He hasn’t played in a while and he doesn’t quite have his sea legs just yet. He’s practiced really well and that’s all you can go on. At some point you have to go play and then you keep progressing. I’m really excited to have him out there and see him practicing, to see him engaged in what’s going on from a reps standpoint. Offensively, he can really help us. We can’t expect too much too soon from a guy who hasn’t played football in over a year and a half.”

D.J. Howard
RS Sr. Running Back
#22 6-0, 205
Lincoln, AL
View Full Profile . Swinney was asked if Gallman or Davidson would start Saturday and he said that decision will be made on Thursday.

“He’s getting better. It wasn’t something that he made his living doing in high school. That’s been the part of his game that he’s having to develop the most. He’s very physical. He can do it but mastering the technique and that kind of stuff has been the biggest part of his development. He’s doing good. He’s on track. He’s going to be a great player. He’s going to play a lot this week. I expect that he’ll get a little more time so we’ll see. We’ve got to continue to bring him along and challenge him. I think he has a very bright future ahead as his confidence continues to grow.”

"No injuries. Everybody has been back in practice this weekend outside of those guys that hurt last week – the new guys (Jordan) Leggett and (adam) Choice. Everybody is good to go. We’re going to probably wait a couple of weeks [on Choice’s surgery] to allow the swelling to go down. Leggett had his already. He’s out there on the bike already. I’ve been really pleased with Leggett. He’s really had a good mentality and getting into his rehab. He’ll be back at some point but I have no idea when. Everybody responds differently. Some guys respond and boom they’re back and some guys take a little bit longer. He’s doing hat he’s got to do."

"Same thing. He’s a little bit better today. He’s progressing. I’m hoping that we get him back sooner rather than later. We’re bringing him along. He had that scope and he’s recovering from that. We may have to drain his knee one more time tomorrow night. This synovitis or whatever – the bleeding has stopped but there’s still a little bit of blood in there that they can take out. He’s good. He’s getting better and improving. It’s just unfortunate that he’s had to deal with that setback. I was talking to him today and he’s had some tough breaks but he just keeps coming. He’s a great talent and he’ll have his time. It will be special for sure. He’ll be back at some point this year. Hopefully it’s the next game or two. He’s had some good moments already this year and there will be some more."